Hallow, everyone. Today is kind of a big day for me because I finally worked up the courage to talk about something very personal here on the blog. Earlier this summer my dad passed away and I had a difficult time coping with it.

It happened just over a month after I left my office job to pursue blogging full time, and just two days after I returned from the blog retreat in Phoenix that I told you about. I’ve been putting off telling you all about it because I have felt like no matter what I wrote, it wouldn’t be enough to explain how truly horrible it is to lose a parent. 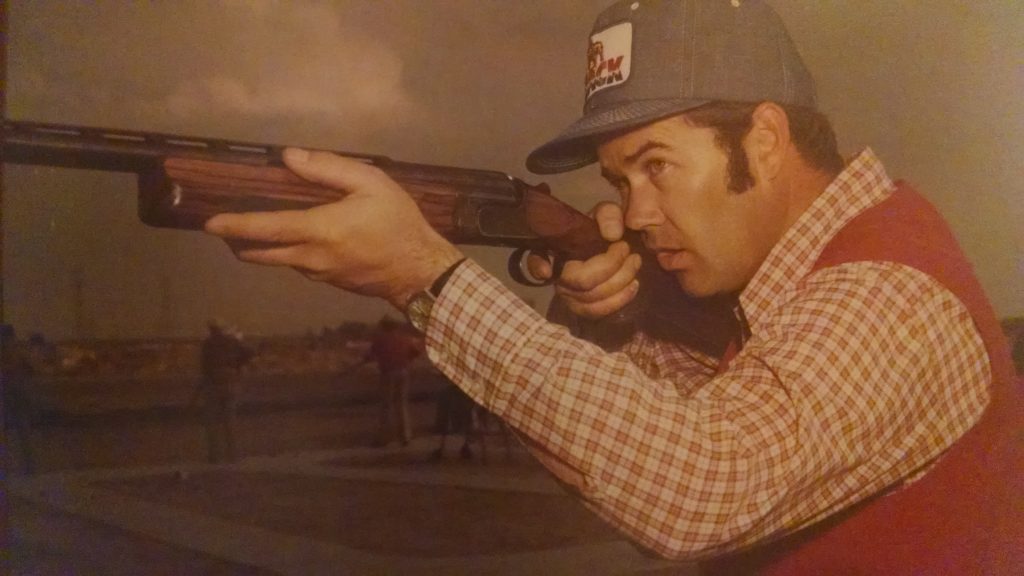 My dad was a sport shooting champion.

Since I’m already spilling my guts to you guys, I might as well tell you that the relationship between me and my dad wasn’t perfect. In fact, we weren’t even really that close. It’s sad to say, but there were people at his memorial service who I’d never even met who knew more about my dad than I did.

It was just because he was a stubborn man who never called me to ask how I was doing. It wasn’t until after he died that I realized that the fault was just as much mine as it was his, because I am my father’s daughter and I am just as freaking stubborn as he was.

I could go on for ages about how this strained relationship affected my life ( I am HIGHLY qualified to do so as I have a Bachelor’s degree in psychology, after all), but the truth is that it doesn’t really matter. He’s gone now and everyone has told me that no matter how much time you did or didn’t spend with someone, after they die you’ll always feel like it wasn’t enough. 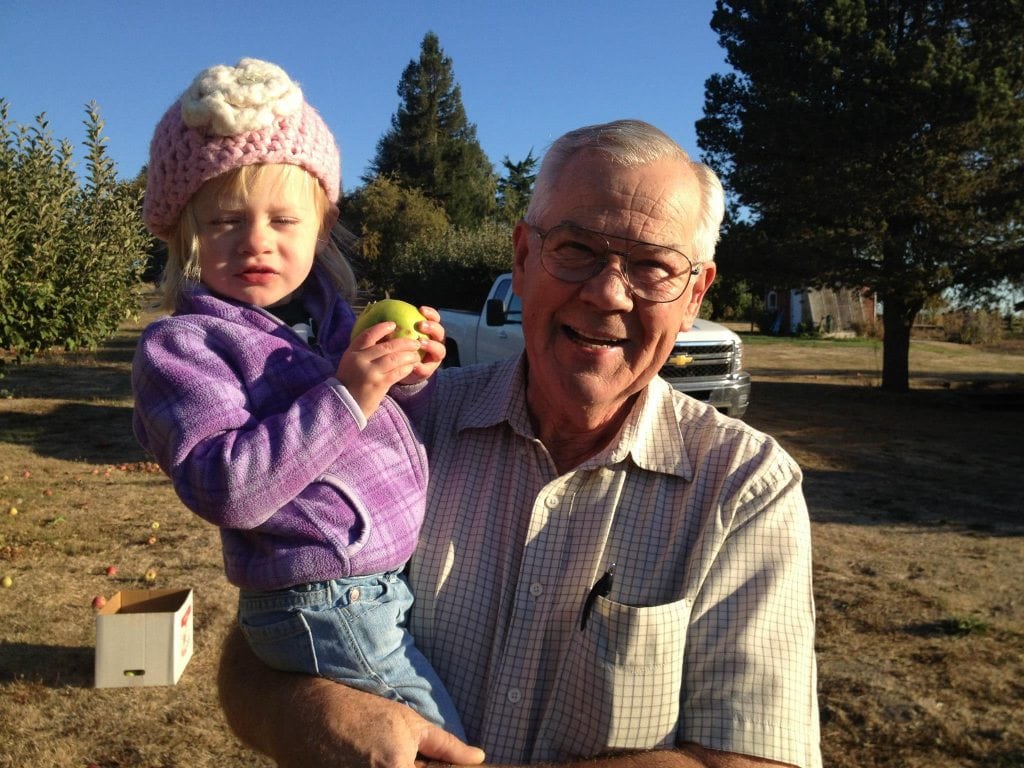 My dad and my niece, Lily , picking cider apples at the orchard.

When my dad called me to tell me about the cancer last November I was commuting to work and started crying on the phone. I remember that he said “Well, Nettie, everyone has to die at some point.”

He was incredibly stoic about the whole process, and as my siblings and I held his hands as he passed away in his living room I couldn’t help but notice how brave he was through all of the pain and indignity that comes with death.

My dad was honest, tough, and didn’t take any bullshit from ANYONE. (<– Important moment in blog history right here, you guys. First swear word EVER.)

He was also highly intelligent and made a lot of money throughout his life. When his doctors finally told him that his sickness was terminal, he got together with his attorney and organized all of his assets into a trust, dictated by his last will and testament.

He asked me if I wanted to keep the family house, and I was surprised he remembered that I once told him it was my dream home. 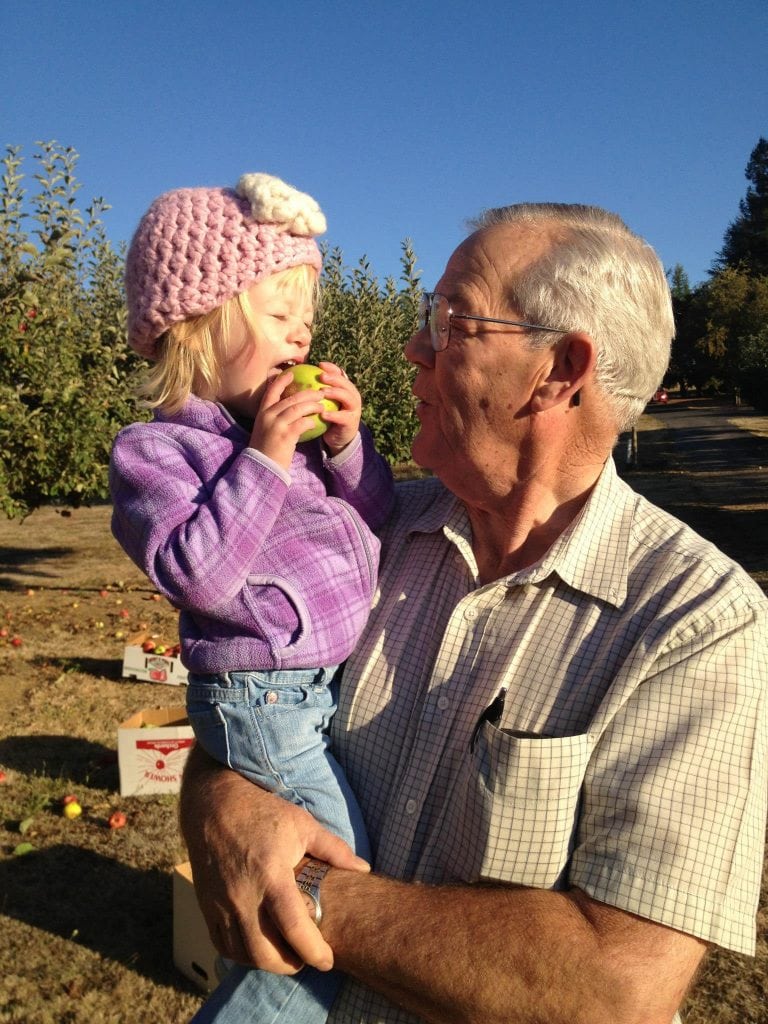 He built the house with my mom when they were married back in 1983. We lived there with him until I was about 4, when my parents divorced and my two sisters and I moved out with my mom.

My mom remarried and had yet another daughter (that makes four of us) with my step dad, Ralph, who is the most generous and supportive dad a girl could ask for. I’ve called him “Dad” my whole life, and he gave me away at our wedding (my biological dad didn’t like weddings, anyway).

Over the years my sisters and I have all gone back over to the old house to see my dad for Father’s Day, his birthday, and Christmas. Sometimes we did other things throughout the year, but it wasn’t until he got sick that I started seeing him on a weekly basis. He told me that he was glad I wanted to keep the house, but that I had no idea what I was getting myself into in terms of taking care of the property.

The “property” is a little over 6 acres and includes two shops, the house, a pond, a creek, an orchard, a garden, a field, and a little forest of conifers.

I don’t know how in the heck the husband and I are going to take care of all of it, but we’re going to make it work somehow because that place is like the Garden of Eden and I LOVE it. 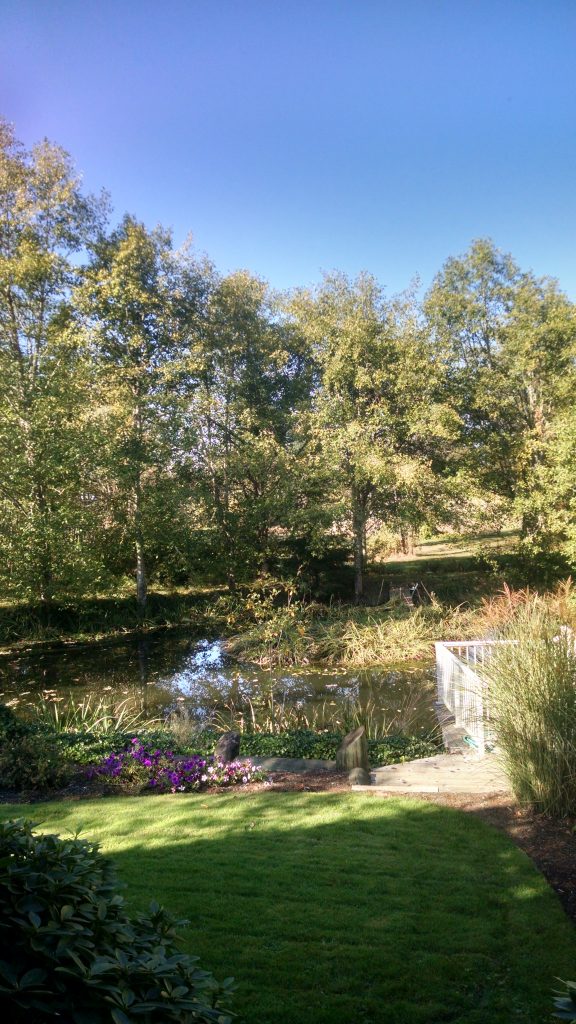 View from the living room.

It took several months to get through all of the paperwork to transfer the house deed to my name, so we’re just now taking possession of the house and starting to update it.

It’s been really hard not to think about the way my dad looked at the end of his illness because he stayed in that house until the very end. He really loved the place, and he wanted to die at home instead of in a hospital.

I’m hoping that by remodeling the house and making it our own we’ll be able to breathe new life into the place and make lots of new memories out there.

I’m going to keep you all updated throughout the renovation project (with LOTS of photos!), but today I wanted to show you a few pictures I snapped of the house before anything was touched or moved.

It’s a bit like looking at a time capsule from the 1980’s – I love giving my mom a hard time about her original design choices (green carpet? wallpaper in every room?).

I hope you enjoy a this little sneak peak into the project! 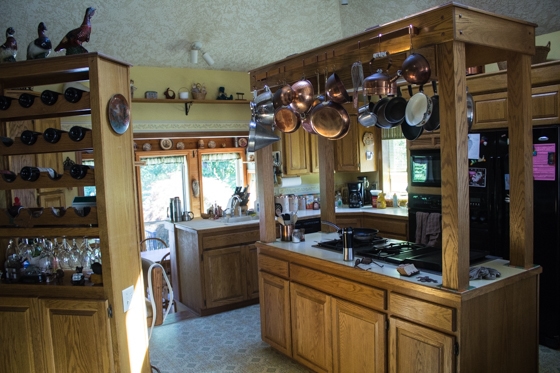 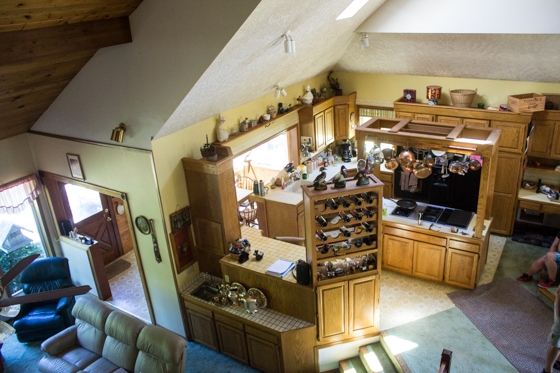 The Kitchen from the top of the stairs. Don’t you just love all of that oak? 😉 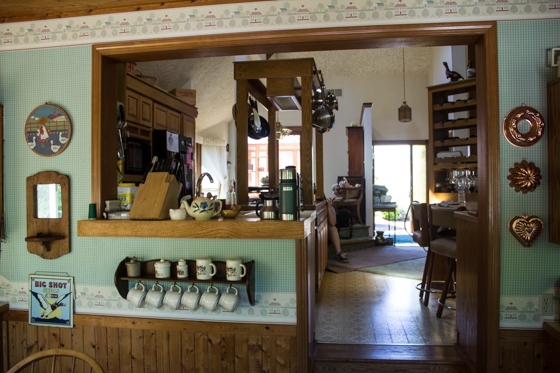 There’s an eat-in kitchen a few steps down below the actual kitchen. Here’s a shot of the pass through looking back into the kitchen. 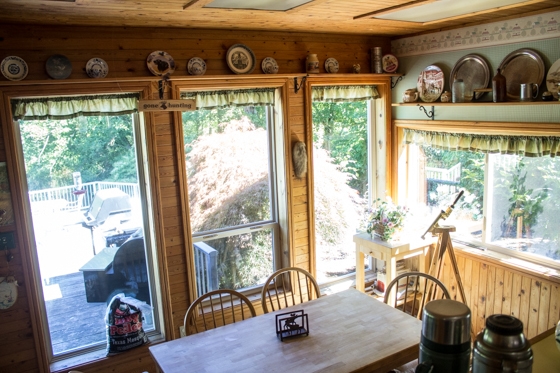 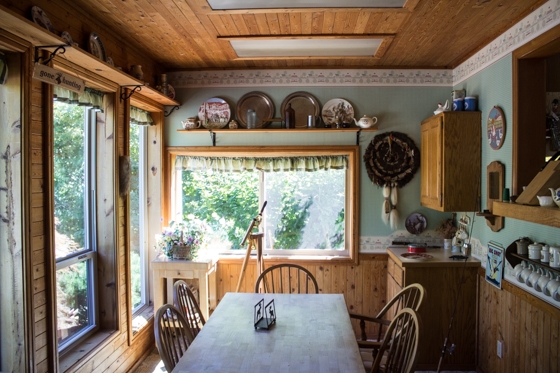 One last shot of the eat-in kitchen. I’m obsessed with it because it’s going to be my new studio! 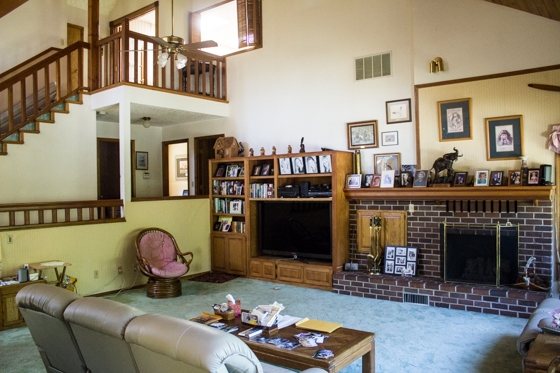 The living room. My mom tells me that the wallpaper used to be white. 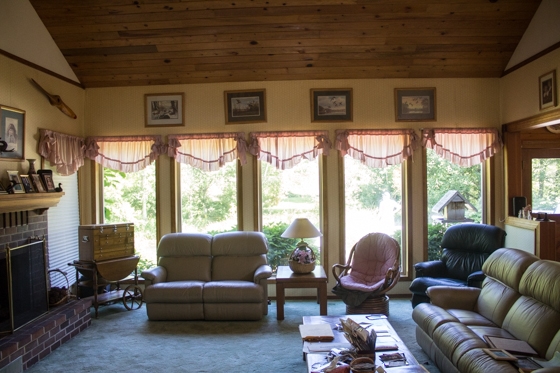 The living room also has a view of the pond. 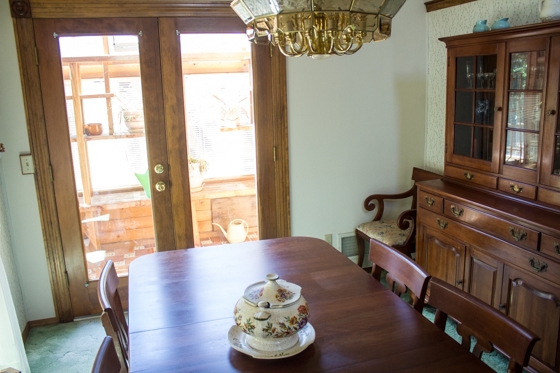 The formal dining room leads into a beautiful sunroom. It stays tropical-weather-warm in there year round. 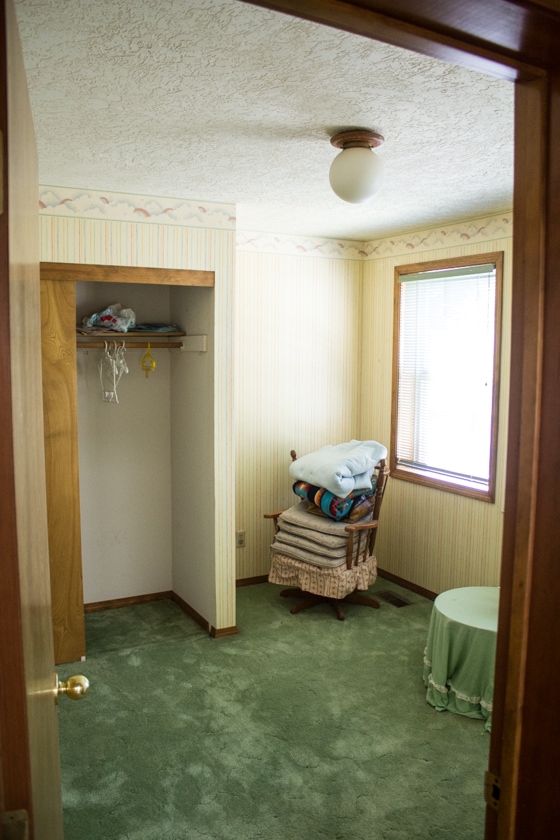 This is the “nursery”, where my mom brought me when I came home from the hospital.