This one-pot tagine of vegetables simmers eggplant, potato, chickpeas, and dried apricots in a Moroccan-spiced sauce. A vegan meal that’ll please everyone! 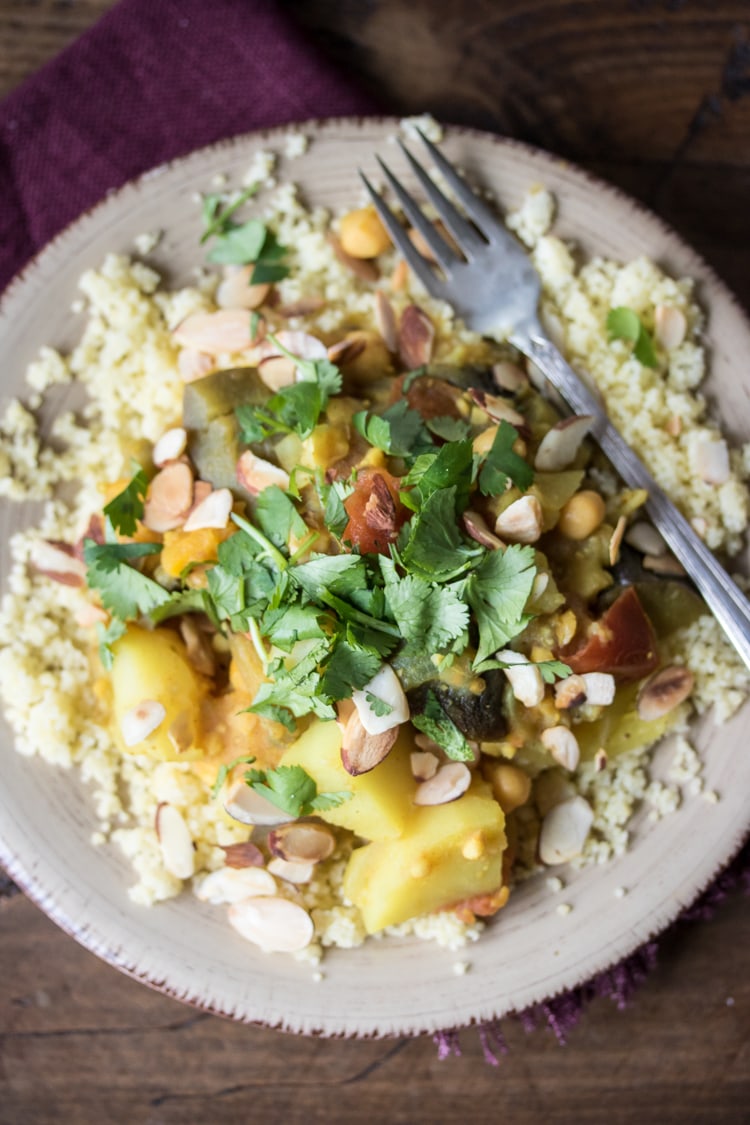 WARNING: Up next is a bunch of chatter about an upcoming adventure. Feel free to scroll down to the recipe if you’re just here for the food.

In the Baba Ganoush recipe post I shared earlier this week I spilled the beans about my upcoming trip to Egypt!

Why I’m talking about a trip to Egypt in a post about Moroccan food is anybody’s guess.

Actually, when I was thinking about planning another trip, it came down to a choice between Egypt and Morocco.

In the end, I decided to go the distance and make the longer trek to the Sinai peninsula.

I was lucky enough to snag some airfare back when there was a deal for round trip tickets to Europe for $400. I decided to buy a one-way ticket to Lisbon, Portugal and then a month later fly back on another one-way ticket from Budapest, Hungary.

The airfare was bought on something of a whim (it was such a good deal!), so then I had to figure out what to do in the meantime.

Luckily, I had a bunch of AMEX points just begging to be used up, so I knew I could arrange for a few extra flights during the trip.

When all was said and done, my itinerary was set as follows:

Sooooo my trip to Egypt turned into a strange month-long journey through 5 countries.

For those of you who are curious, here’s the tour I booked for my time in Egypt and Jordan.

I don’t usually travel by tour, but since I’ll be alone in a truly unfamiliar place I thought it would be prudent this time around.

I have family in Jerusalem, plus I’ll be busy with the travel conference, so I’ve got plenty to keep me busy while I’m in Israel.

Lisbon and Budapest, though…. no clue what I’m going to do in either of those places. I mean except eat EVERYTHING.

Alright, that’s a LOT of talk about something that has nothing to do with this recipe. 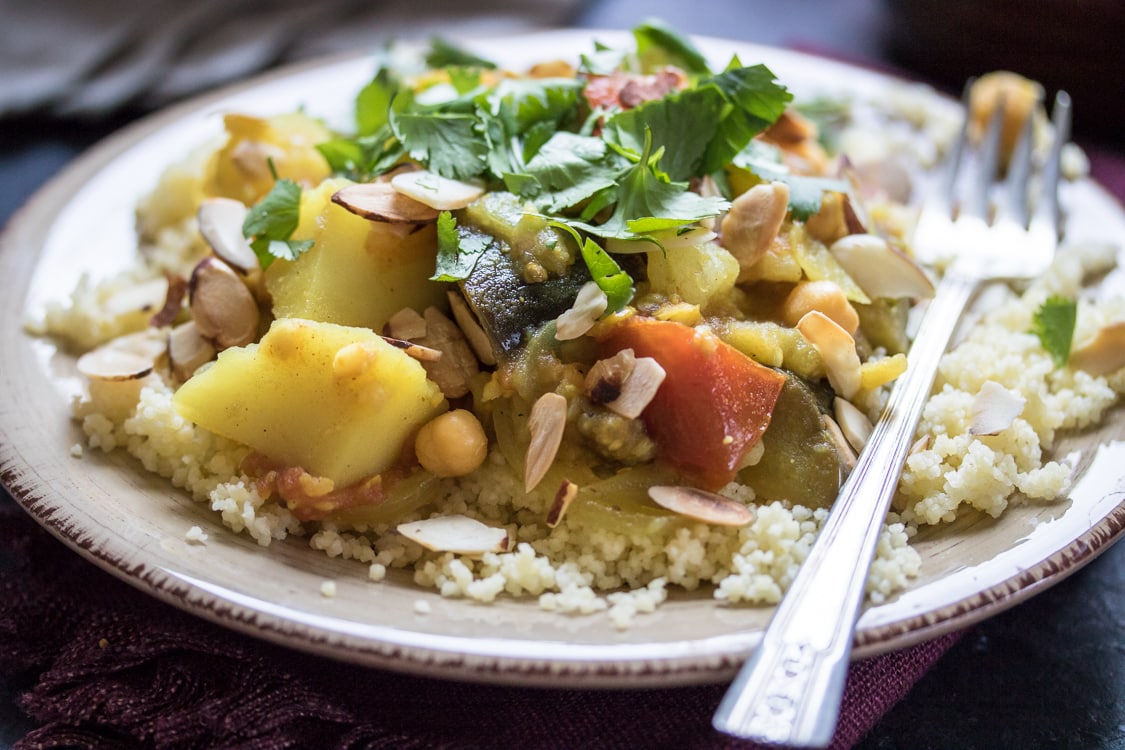 This is kind of a fake-y tagine because it isn’t actually made with a tagine.

Look, stop judging me, okay? I have one… somewhere. I just can’t find it or maybe I donated it because I never use it.

Anyway, seeing as most people probably don’t own one either, I think it’s suitable to share this recipe which utilizes a plain old Dutch oven.

This one-pot tagine of vegetables is SUPER easy to make. 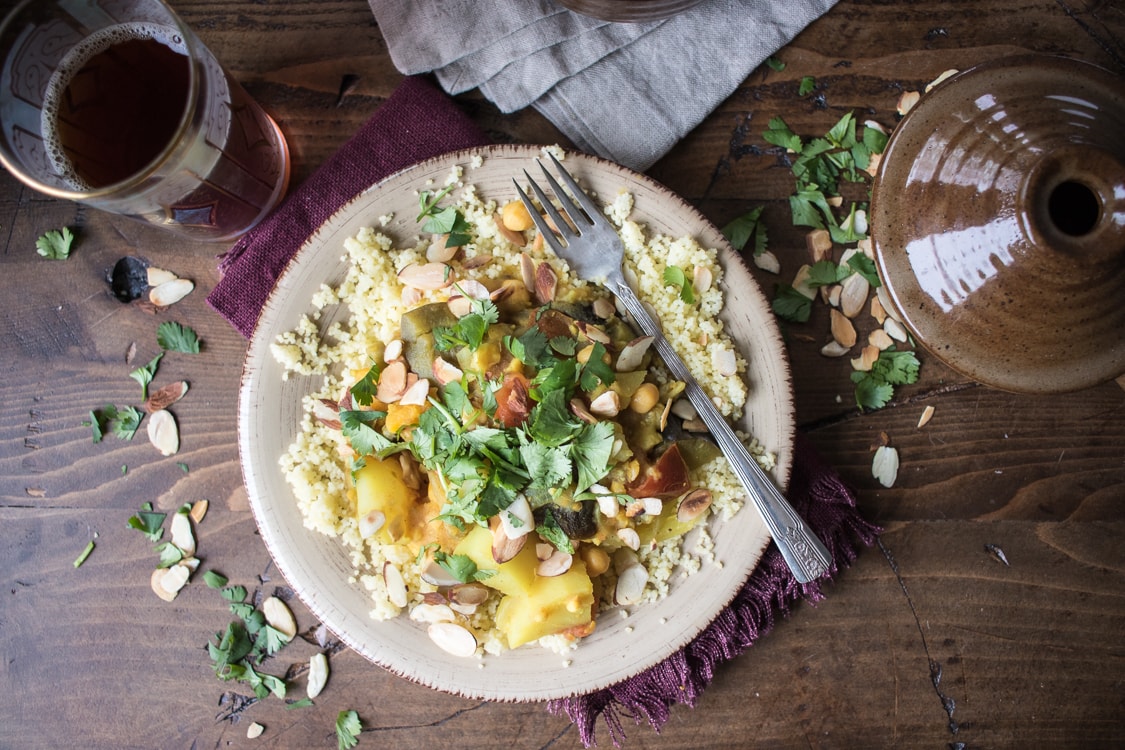 It requires a bit of prep work, but maybe you can enlist some help from your significant other or house guests.

Anybody that can manage to peel a potato will do.

You start by sauteeing some vegetables and eggplant in oil — and yes, before I get questions in the comments, leave the skin on! It will soften up as it cooks. Trust me, you’ll like it. 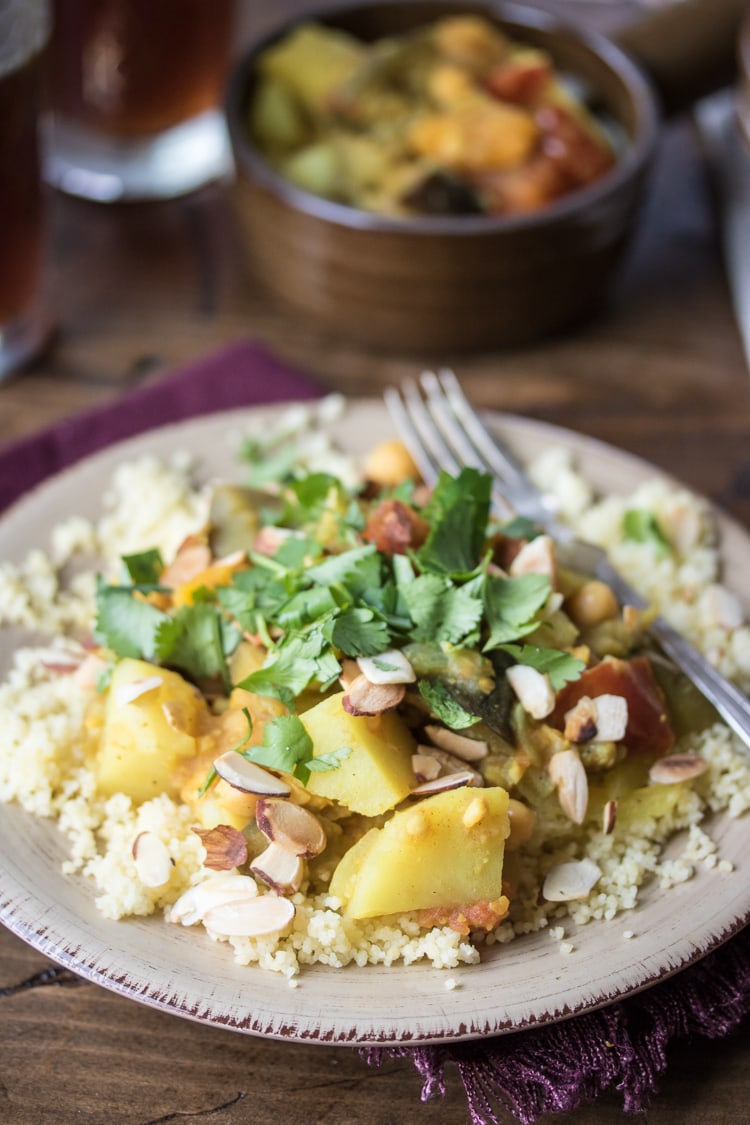 Next, chuck in some peeled potatoes, tomatoes, dried apricots and broth. Let it all get cozy and cook it until the potatoes are nearly falling apart.

To thicken things up a bit, you’ll mash half a can of chickpeas up with a fork before adding them into the pot. The rest of the chickpeas are allowed to remain whole.

Serve the tagine over a bed of prepared couscous, then top with toasted almonds and chopped fresh coriander.

Make sure you don’t forget the lemon wedges for squeezing! They add *just* the right punch of flavor. I forgot to put them in the pictures because I’m awesome like that.

Nutrition information has been auto-calculated for your convenience. 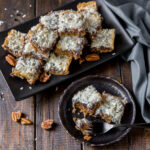 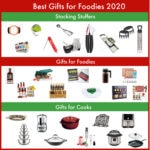 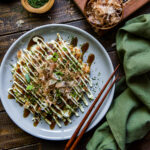 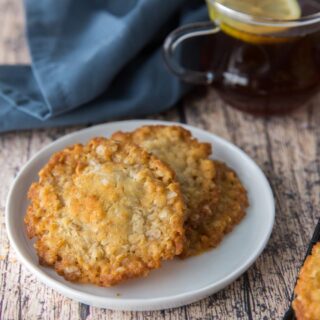 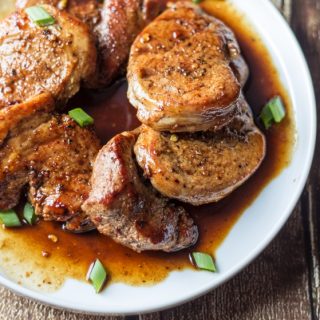