This spiralized pickled zucchini recipe makes tangy, crunchy, and sweet zucchini pickles that are delicious right out of the jar, on sandwiches and salads! 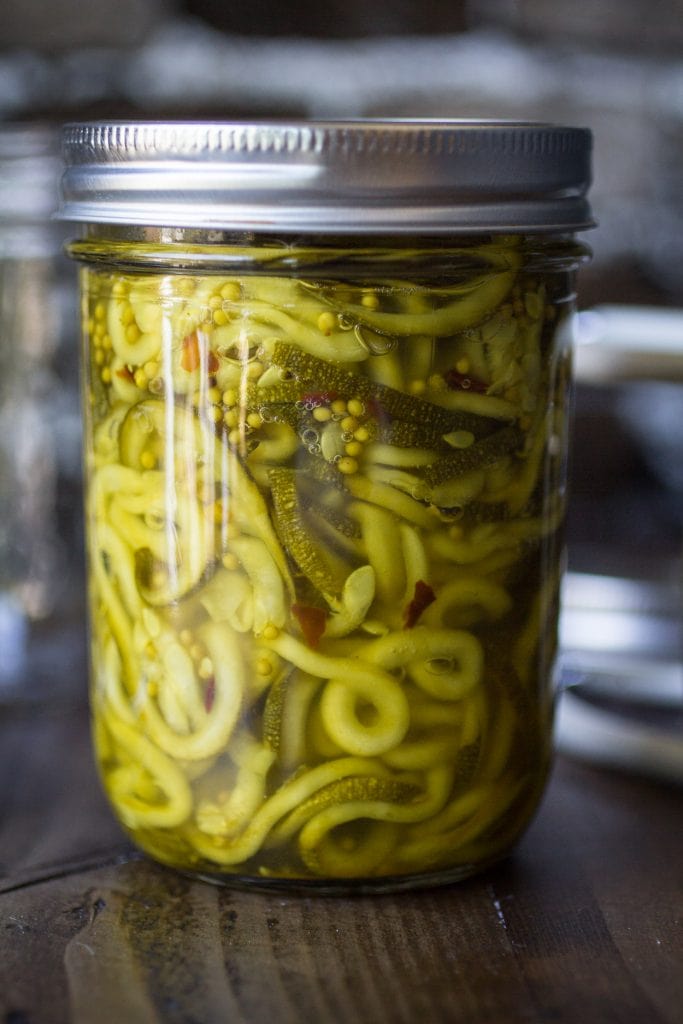 How to pickle zucchini, you ask?  Well, I’m going to show you!

Remember how in Monday’s summer squash bread post I told you all about how I shredded up a truckload of squash and zucchini to make bread?

Well, I fibbed a little bit. I saved some of the smaller zucchini to make spiralized zucchini pickles! 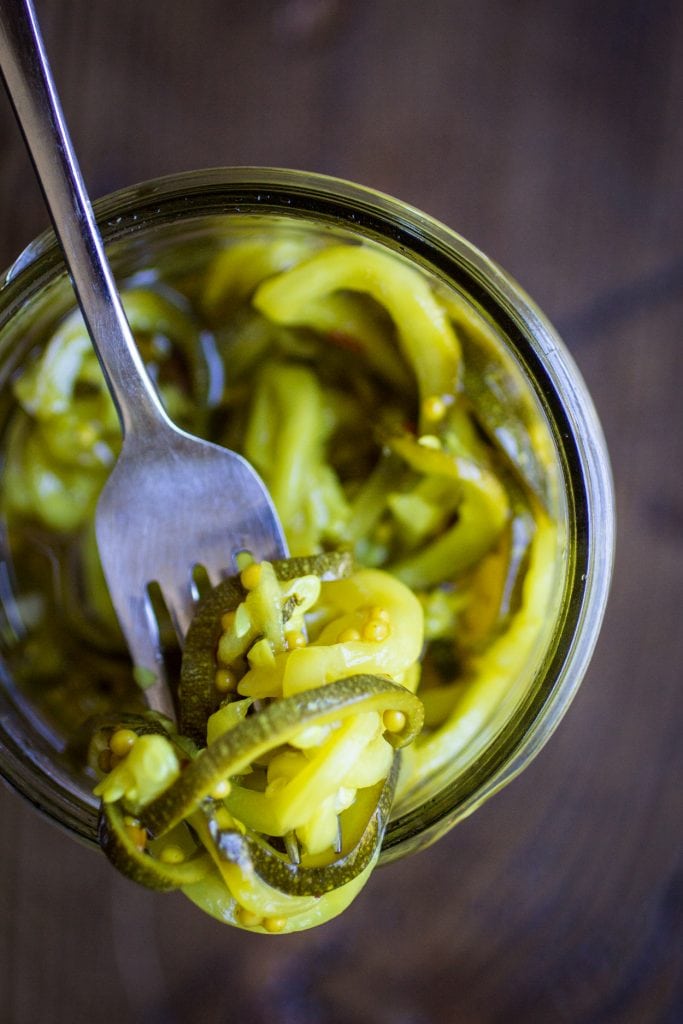 Just like the squash bread, this recipe experiment was created out of necessity. I got really excited when I planted my garden this year and expected that I’d have a TON of pickling cucumbers by now. I bought some canning books.  This one is by far my favorite, and written by a fellow blogger.

I dug all of my mom’s old canning equipment out of the closet, and started dreaming about all of the pickles I was going to eat.

Unfortunately, my cucumber plants decided to be total jerks and each have only grown one weirdly curly fruit. But, what I lack in cucumbers, I more than make up for in zucchini. Probably because the zucchini is so easy to grow.

Right, so, I wanted pickles and I had a lot of zucchini. I didn’t like the idea of pickled zucchini chips, so I decided to whip out the good old spiralizer attachment. 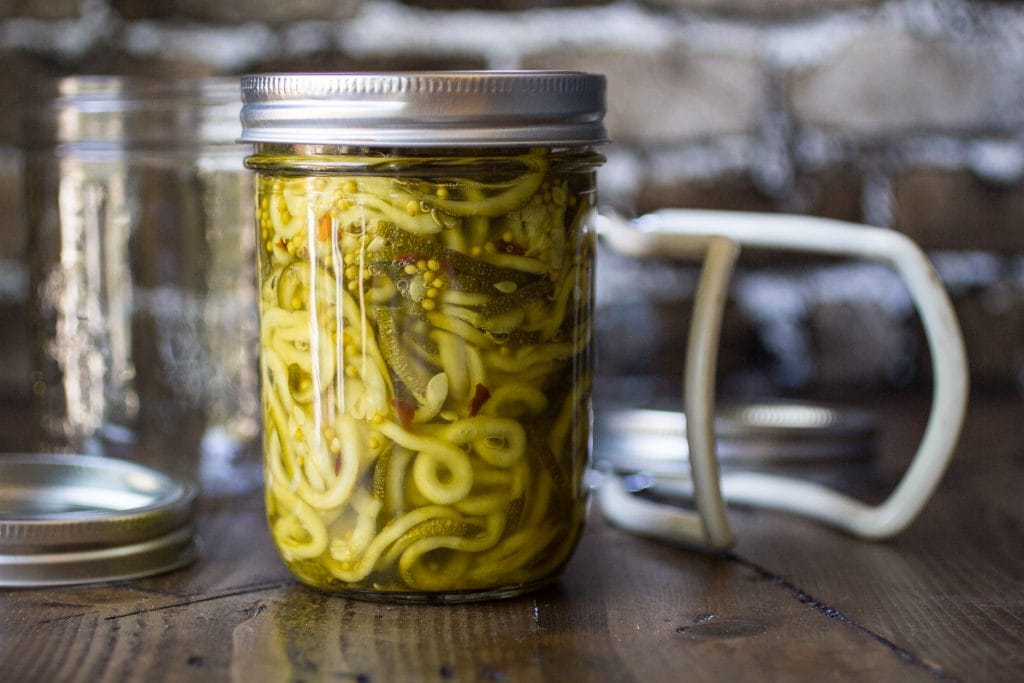 Within minutes I had a whole mess of spiralized zucchini just ripe for the pickling. I salted them to remove excess moisture, patted them dry, then stuffed the curls into hot jars along with some Ball Pickle Crisp.

Next I boiled some pickling brine and ladled it into the jars. I followed the instructions in my America’s Test Kitchen Fool Proof Preserving Cookbook for zucchini pickles by processing the jars in a hot water bath for 30 minutes.

If you need a canning kit, here is a good one that is not expensive.

The spiralized zucchini pickles came out tangy, crunchy, and sweet; just how I wanted them! I absolutely love them on sandwiches, but mostly I just eat them straight out of the jar with the refrigerator door open. 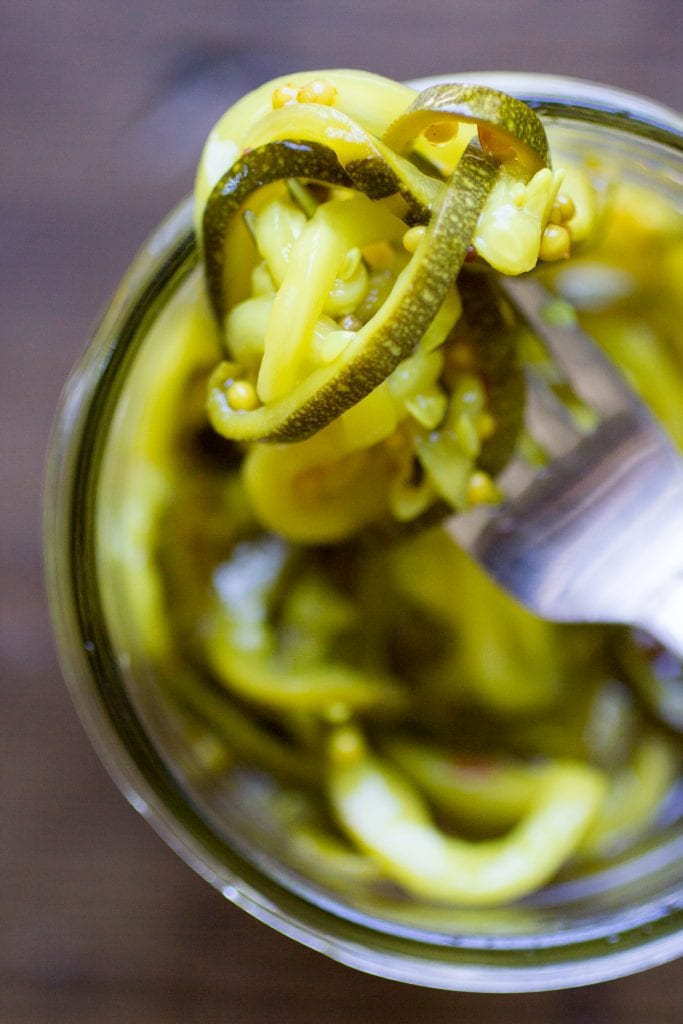 If you’re not into the whole canning zucchini thing, you can always make these as refrigerator pickles instead – I’ve made some notes in the recipe below that should help you out.

Ready for some crunchy zucchini pickles? Then print this recipe and make some today! 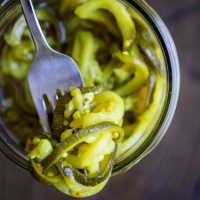