Hvar, Croatia is an island paradise. Once you’re tired of the crowds in Dubrovnik, hop on the high-speed ferry and relax for a weekend in Hvar! 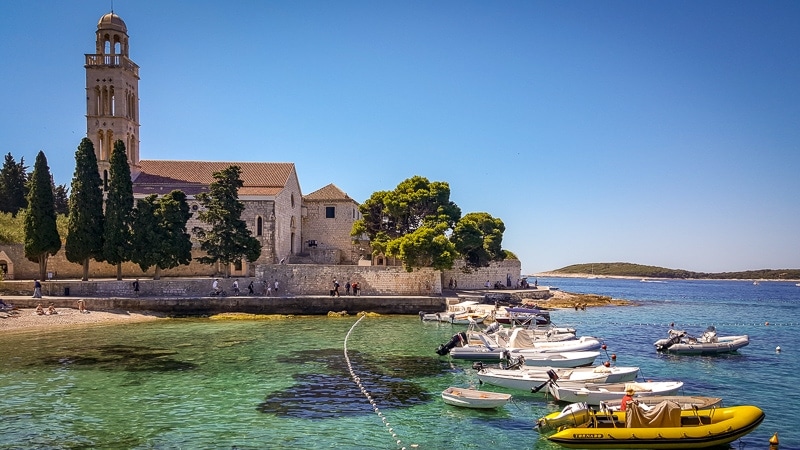 As I write this, I’m bemoaning the loss of a treasured possession.

About two months after visiting Croatia, my backpack was stolen in Sweden.

I know, right? Of all the places.

Of course, losing all of my clothes, shoes, toiletries, and souvenirs was a total buzzkill. The worst part, however, was the loss of my travel journal.

Not only did it contain more than six months worth of stories and musings, it also contained lots of precious details I planned to share with you.

My friend Taliha and I explored the Croatian island of Hvar by scooter, and as we went I kept track of our route, the secluded beaches we found, and the little spot in Stari Grad where we ate lunch.

Of course, all of that is lost now, so I have to do my best to re-discover this information via good old google. 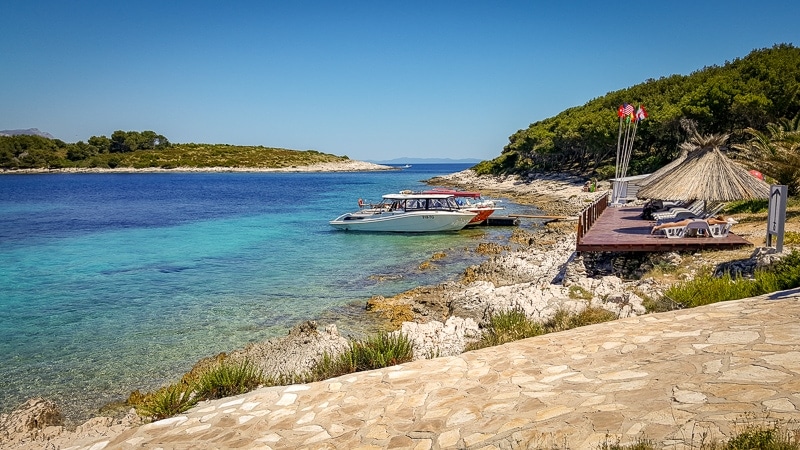 Before we arrived in Hvar, we spent a few days in the walled city of Dubrovnik. I thought about writing a post about Dubrovnik, but it seems like it was featured on the cover of every travel magazine in the world last year, so I don’t think I need to tell you all about it.

It was very pretty, but so packed with tourists that it was hard to enjoy. Let’s just say I’m glad I visited, but I wouldn’t go back.

Hvar, on the other hand, was lovely. 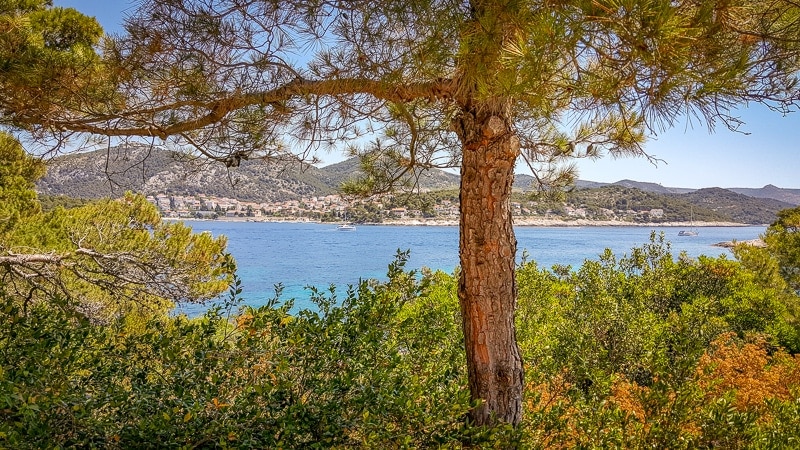 We boarded a (seasonal!) high-speed ferry and were there within about three hours. We stayed in Hostel Villa Marija (affiliate link!) in Hvar Town, which had a great atmosphere and lots of friendly travelers.

Hvar is known as a bit of a party island, but there are plenty of relaxing things to do during the day.

As I said, one of the days we were there we rented a scooter to explore the island. The hostel called the rental company for us, and they quickly came over to pick us up.

About thirty minutes of paperwork later, we were handed a basic map and some vague directions for exploring the island. We put on our helmets, Taliha fired up the ‘engine,’ and we hit the road.

We headed toward Milna and Zarace, stopping along the way anytime we saw a promising beach. 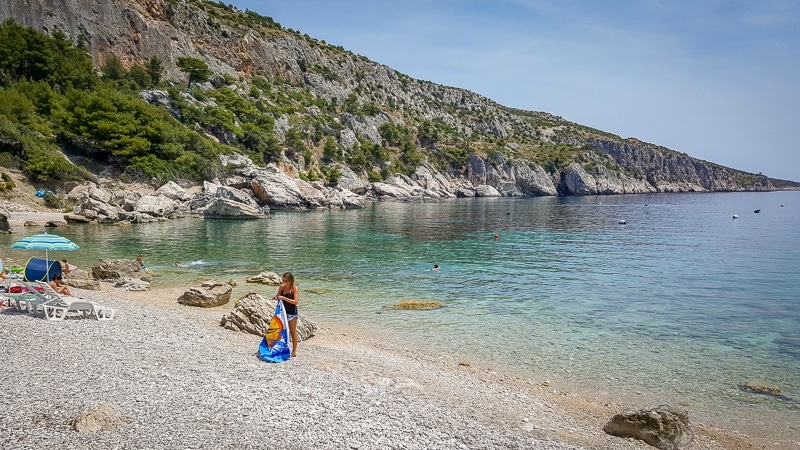 Most of the beaches are of the “small pebble” variety. They are quite different from the sandy beaches of the Caribbean, but just as lovely.

We visited in early June. The weather was perfect and there were usually only one or two other people on the beaches.

After a quick swim, we stuffed our towels back under the scooter seat and kept driving toward Stari Grad. 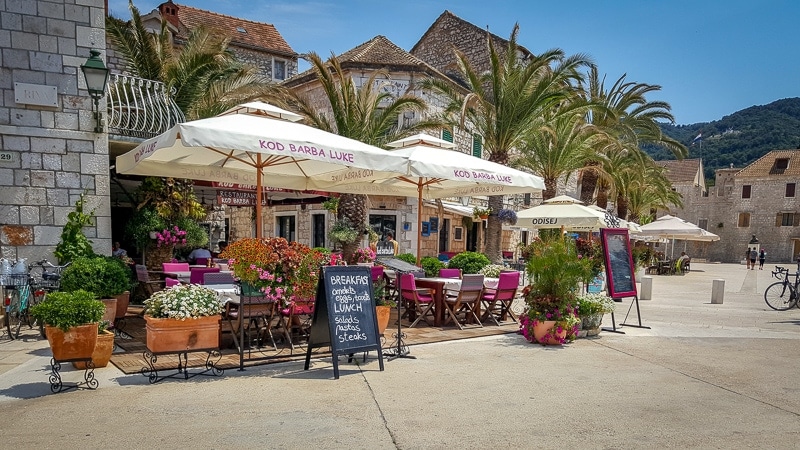 Stari Grad (which translates to Old Town) is a lovely little port town filled with ancient buildings and water-side cafes. 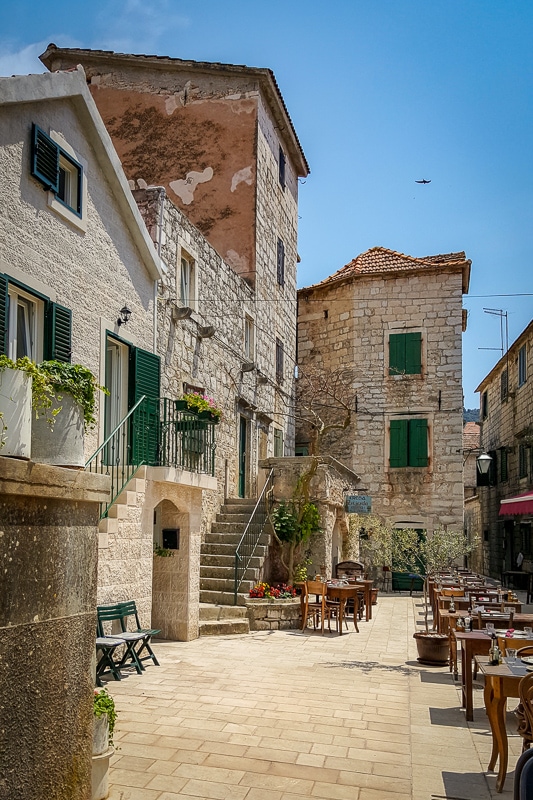 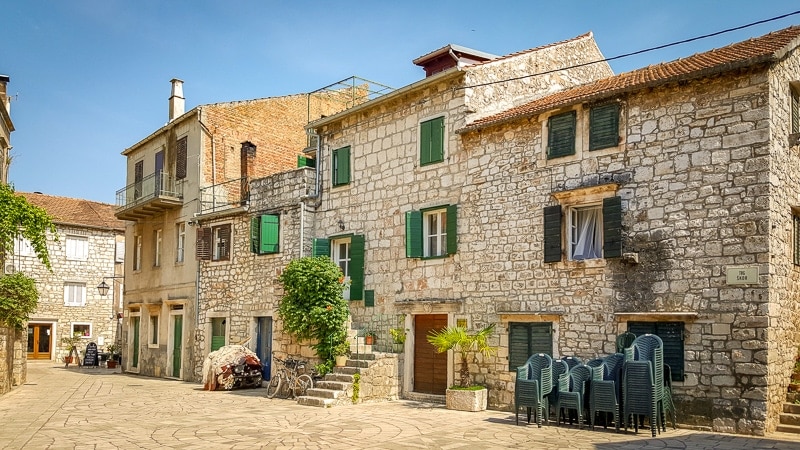 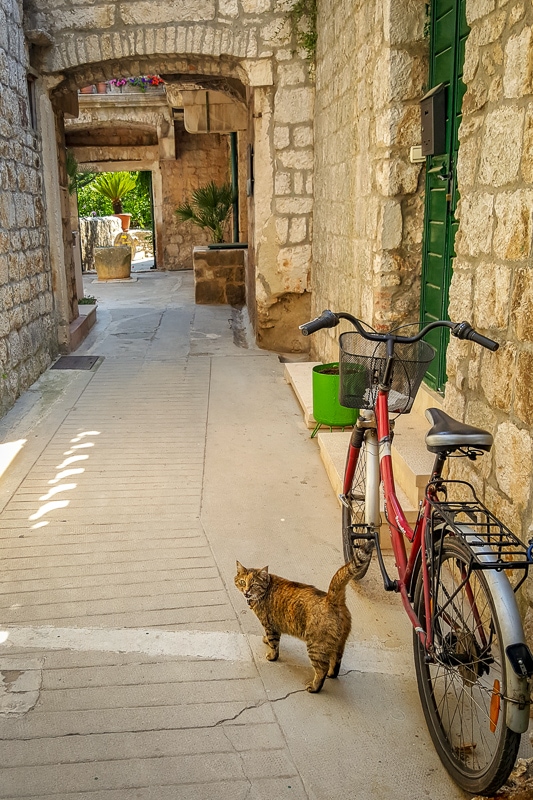 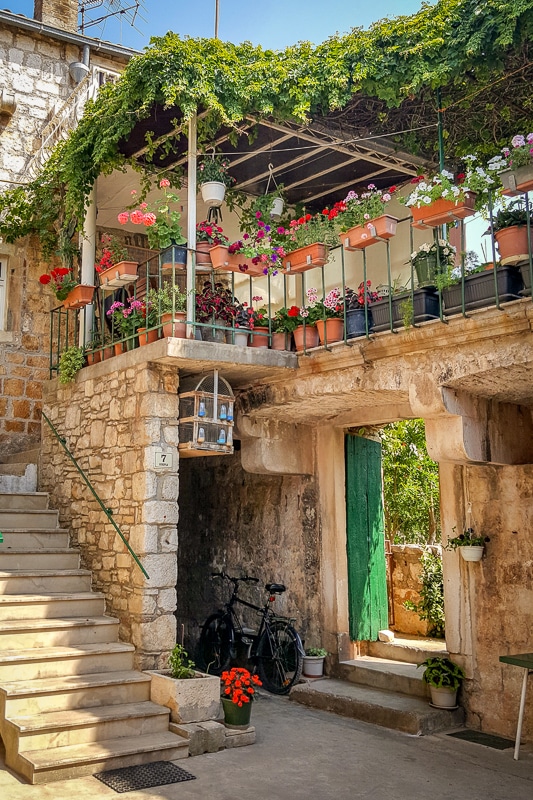 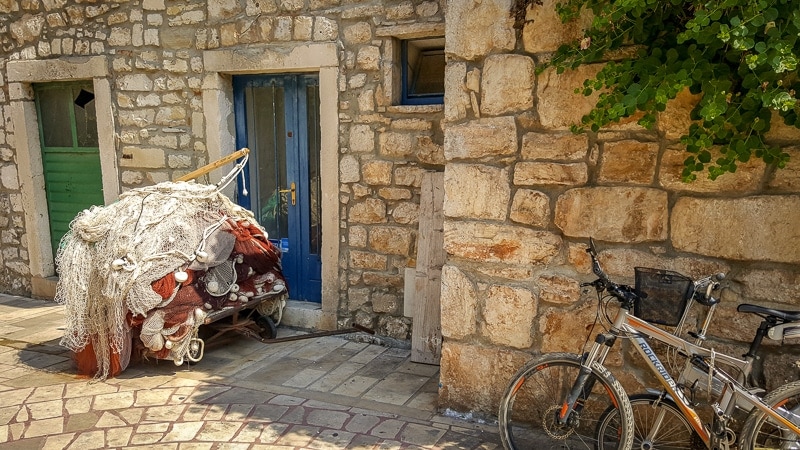 We ate some lunch and wandered through the village for an hour or so before leaving in search of more beaches.

Here’s where things got interesting.

We wanted to drive back towards Hvar Town on a route that led through the lavender fields. We *thought* we were told by the rental agency to go through a tunnel (hand-marked on our map with a little red circle) on the way back.

When we arrived at the entrance to the tunnel, we saw a little traffic light with the red bulb lit. Realizing it was a one-way tunnel, we waited our turn until the light turned green.

As soon as we entered the tunnel we realized we had made a big mistake.

Taliha, wearing her darkly-tinted prescription sunglasses, couldn’t see a damn thing in the un-lit tunnel. I was on the back of the bike, stretching my neck like a giraffe to see where we were going.

The little headlight didn’t do anything to illuminate our path, so I did my best to guide Taliha slowly through the dark while avoiding the seemingly endless potholes. Ice cold drops of water rained down from tiny stalactites as we drove under the mountain.

After what seemed like an hour, I could see a light at the end of the tunnel.

We had taken too long in the tunnel. The traffic light on the other side had turned green, sending one-way traffic straight towards us.

I wish I could say I didn’t panic, but I definitely did. Taliha kept her cool and guided the bike as far to the right side of the road as she could while I let loose a string of varied and colorful curse words.

When the cars had finished narrowly passing us by (with more than a few honks and shouts of what I can only imagine was the Croatian word for “idiot!”) Taliha drove us out of the tunnel, pulled over, and threw up the kickstand.

We paced around, shook ourselves off, and exchanged a few lines of “holy s*&#, can you believe this s*&#?! S*&(!” in high-pitched voices.

Once we calmed ourselves down, we got back on the scooter and followed the road down the mountain.

Eventually it led us here: 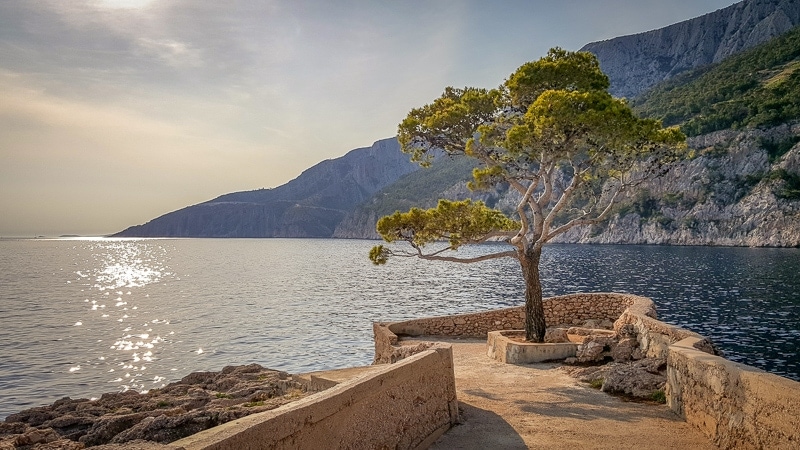 The end of the road, folks. Literally.

After a good half hour of searching for alternate routes and reviewing the map over and over, we came the the horrifying conclusion that the only way back to Hvar Town was back through the darn tunnel.

The jury is still out on whether or not they told us this before-hand. 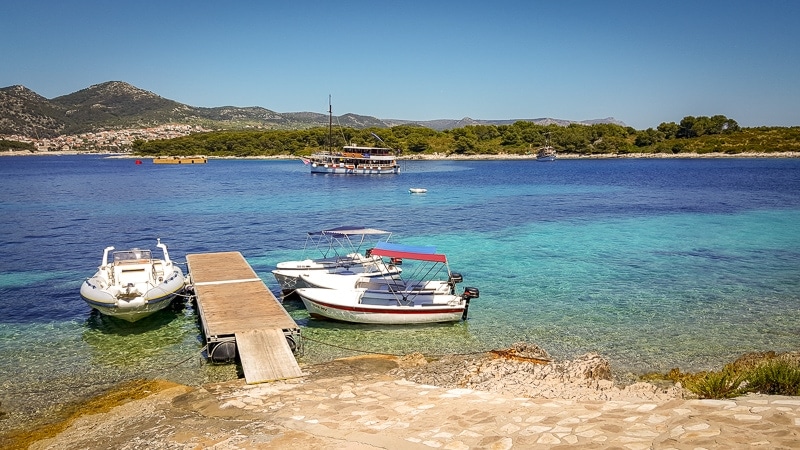 The next morning, we decided we needed to take it easy and spend the day at the beach.

We went down to the marina and asked around about a boat to the nearby Pakleni Islands. We found a guy who would take us to Jerolim island and pick us up again later in the day.

Upon arriving on the island, this is what we found: 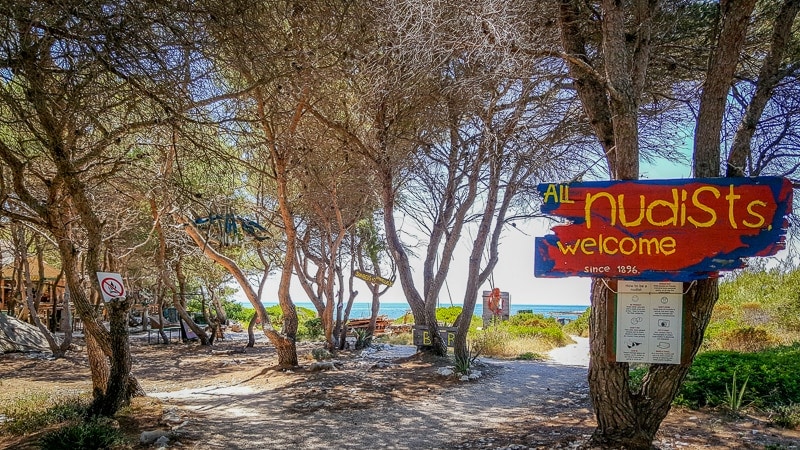 After our time in Montenegro, we were old hats at the old nudist beach scene, so we settled in for a day of evening out our tan lines. 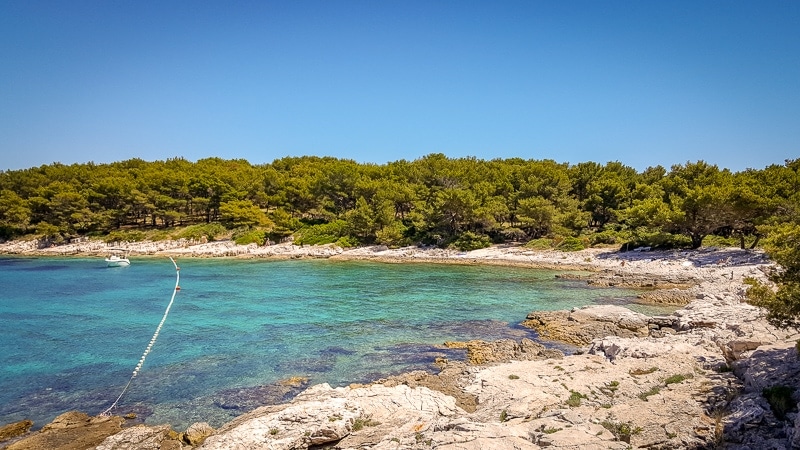 In the evening, we hopped the boat back into town and enjoyed a night out with a group from our hostel.

Before we knew it, it was time to get back on the ferry and head to our next destination.

If you’re headed to Croatia, I highly recommend spending a weekend in Hvar.

Just watch out for those darn tunnels.