When I first arrived in Albania, I was less than impressed.

My trusty travel partner, Taliha, and I had just arrived by bus from serene Lake Ohrid into the bustling city of Tirana.

We did a bit of shopping, visited the must-see-sights, and ate some typical Balkan food.

Within a day I was ready to move on.

I think I was just a bit tired of the typical Balkan hostels, breakfasts, and restaurant menus.

Aside from some gorgeous old buildings in Skhoder, I wasn’t thrilled with the city life in Albania.

Now, a few people had mentioned to us that Albania had nice beaches. Having gone nearly three weeks without swimming in the sea (gasp!), Taliha and I were both keen to find some saltwater.

We knew that there were plenty of buses in Albania that could take us to a few of the bigger towns along the coast, but we wanted more freedom.

After doing a bit of research, we decided to rent a car so we could explore isolated coastlines and ancient ruins on our own schedule.

We drove from Tirana down to Hirande and stopped a few times along the way to swim.

We befriended a Kiwi gal named Rebecca at our hostel in Tirana* who was headed to Greece. She came with us on our road trip, and it’s a good thing she did because I was way too hungover that first day to act as navigator.

The three of us had a blast sunning ourselves on abandoned beaches and singing along to 90’s tunes in the car.

Driving through the mountains was a harrowing experience.

The road winds you up all the way into the clouds!

If the height doesn’t scare you, the Albanian drivers will.

When we made it to Himara, we picked up another traveler at our hostel.* Benny, a tall German backpacker also on his way to Greece, hopped in the car and drove with us to Saranda.

Being Europe and all, there were naturally some old fortresses along the highway to explore.

Saranda is a great place to enjoy dinner with a view.

In Saranda, we made yet another friend at our hostel* (are you noticing a pattern here?). This time with an Aussie girl named Emma. With all five seats full, we drove to Ksamil.

Ksamil isn’t as big as Saranda and didn’t have as many hostel options, so we decided to just visit for the day and then make the quick drive back to Saranda in the evening. We enjoyed a spectacular day drinking fruity cocktails on the beach!

If you’re interested in fitting some culture into your itinerary, make a detour before you get to the beach. Near Ksamil are the ancient ruins of Butrint.

Butrint was inhabited way back in prehistoric times, and was later a Greek colony before it was turned into a Roman city.

There’s a museum within the ruin complex which offers great views of Butrint National Park.

For those interested in natural wonders, Albania has a special treat just for you.

Not far from the ruins is Syri Kalter, known as the Blue Eye in English.

The Blue Eye is a natural water spring bubbling up from under a stream.

It’s outrageously beautiful and definitely worth a visit!

You can go for a little walk along the stream and enjoy a cold beer at the nearby restaurant.

We loved these huge plants for some reason.

Before we knew it, it was time to part ways with our three new friends.

We drove through the mountains back to Tirana to return the car and make our way North torwards Montenegro.

There is truly so much more to Albania than the capital city of Tirana. I’m so glad we had the chance to explore this hidden gem!

A Hike to Lac Noir (La Grave, France)
The Complete Road Trip Guide to Georgia (the Country!)
The Perfect Long Weekend in Central Oregon
12 Life Lessons I Learned in Brazil
How NOT to Visit Plitvice Lakes
Itinerary: 3 Days in Malaga, Spain
How to Spend 4 Days in London
5 Reasons Why You Need to Drop Everything and Go to Cartagena

THE WANDERLUST KITCHEN
© 2021 All rights reserved.

The Wanderlust Kitchen may collect a share of sales or other compensation from the links on this page. This comes at no additional cost to you, and all the prices and availability are accurate at the time of publishing. As an Amazon Associate I earn from qualifying purchases. 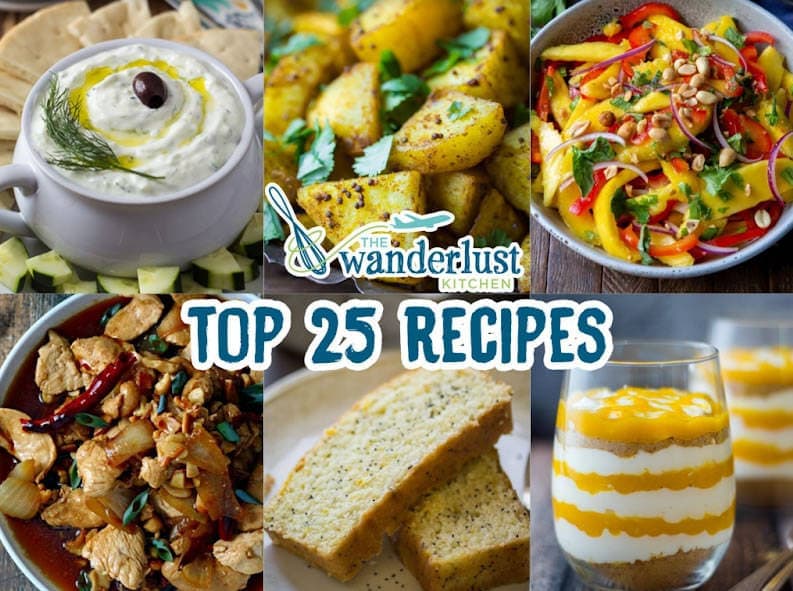 This eBook includes our top 25 recipes in a beautiful, easy to download format. Enter your email and we’ll send it right over!