This Moroccan Chicken Tagine recipe is a delicious mixture of flavors from dried apricots, onions, tomatoes, chickpeas and spices that will delight your tastebuds! 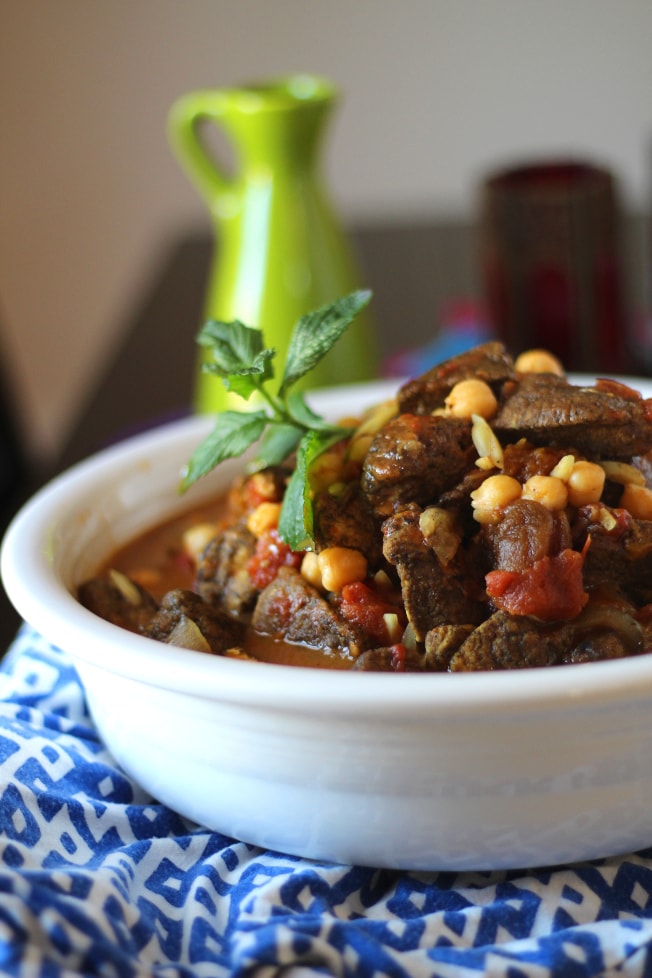 The Moroccan restaurants in the area are too far away from me.

Whenever I do get up the energy to brave the long trek, I feel like I need to step outside of my comfort zone and try something new and crazy. I figure that if got myself all the way down here, I better make the most out of the experience.

On one of these excursions I  took a giant leap out of my comfort zone and made reservations at a Moroccan restaurant. This restaurant really had all the bells and whistles, including poufs on the floor instead of chairs, rosewater hand washing to begin your meal, and belly dancers that you have to awkwardly look at while you are eating.

I’ve been back to that restaurant many times since that fateful first venture, yet I’m entirely unable to order anything other than the Apricot Chicken Tagine. This plate of sweet, spiced chicken and tender apricots just hits the spot.

I decided that I wanted to try to recreate the tagine chicken breast dish at home (from memory) which wasn’t exactly easy. Since I’m also very lazy I wanted to make it in the pressure cooker to cut back on some of the cooking time. If you don’t own a pressure cooker, don’t fret! I’ll provide instructions below for using a regular Dutch oven.

After a lot of experimentation, I’m very happy with this pressure cooker tagine dish and am ready to share it with all of you. A serving is under 400 calories and it REALLY fills you up. Boy, aren’t you just lucky?

I give you, the Moroccan Chicken Tagine:

Is that not the darkest chicken you’ve ever seen? The husband was eating the leftovers for two days before he realized it was chicken. He doesn’t have the most refined palette in the world, which is great for me because he’ll eat pretty much anything and I’m a terrible restaurant food order-er.

The chicken is tossed with flour and Moroccan spices prior to being seared in the bottom of a hot pressure cooker (or Dutch oven).

I use a Fagor brand pressure cooker and a Martha Stewart Dutch Oven.

The chicken comes out of the pot, and the ginger, onions, and garlic go in. The pot gets de-glazed with broth before the apricots and tomatoes are added, then the chicken pieces find their way back into the mix.

Bring the concoction to high pressure over high heat, then reduce the heat to maintain the pressure and process for 5-7 minutes.

If you’re using a Dutch oven, simply bring the mixture to a boil, reduce it to a simmer, and cook for 20-25 minutes until the chicken is cooked through and the apricots are tender.

Stir in some honey, almonds, and chick peas and serve this chicken breast tagine with couscous. 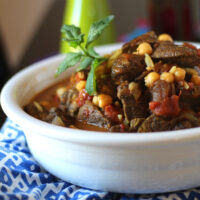