Going on your first African safari? Here are 29 things I wish someone had told me before mine!

It seems like there are a million guides out there to help you choose where you want to go on your first African Safari. There’s plenty of advice reminding you to consider choosing a location based on the time of year, special migratory events, and even airport convenience.

This post isn’t intended to help you decide where to go, but to be of use to you no matter where you were going!

Whether you’re roughing it in one of Kenya’s many tented camps, relaxing in a South African safari lodge, or even sightseeing by boat in Botswana, you’re likely to be a little nervous before your first African safari. 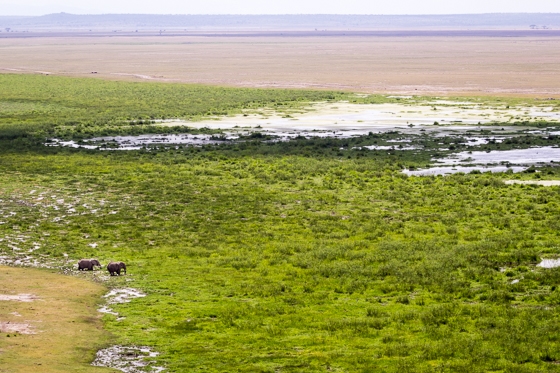 For my first safari, my youngest sister and I spent a week in Kenya. We landed in Nairobi, drove to Amboseli, then flew to Mara before spending a night in the Nairobi National Park. In case you’re curious, we stayed at the Porini Amboseli Camp, Mara Intrepids, and the Nairobi Tented Camp. We booked through Gamewatchers and had an outstanding experience!

Please enjoy this cheesy picture of the two of us in Amboseli: 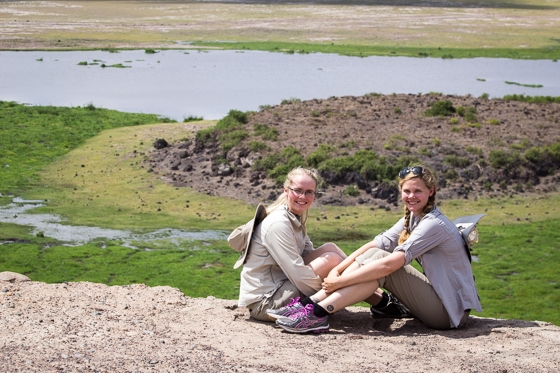 Alright, here are a few basic pieces of advice before I jump into specifics: 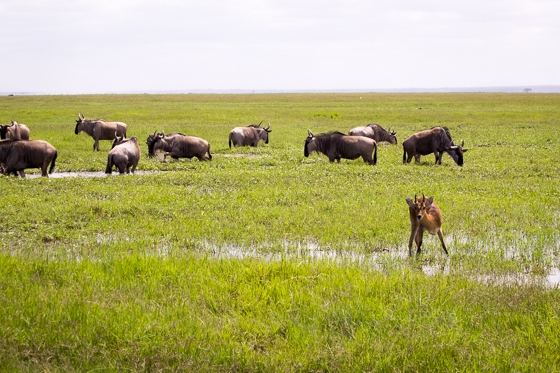 On to the good stuff!

My sister, Emily, and I learned a LOT on our first safari, and we also had the benefit of spending a lot of time with safari veterans while on our trip. Some of the people we met had been on safari more than six or seven times! We had plenty of opportunities to pick their brains about tips and tricks during some of our 12-hour long game drives.

Here are the top 29 pieces of advice that I’d consider “need to know” before your first African safari!

What You Need to Know Before Your First African Safari

1. It’s okay to ask questions of your guides. It’s amazing how much they know about animal behavior. Just take note of your surroundings – don’t be the person hollering across the vehicle when everyone else is trying to keep quiet to avoid scaring off a shy animal. 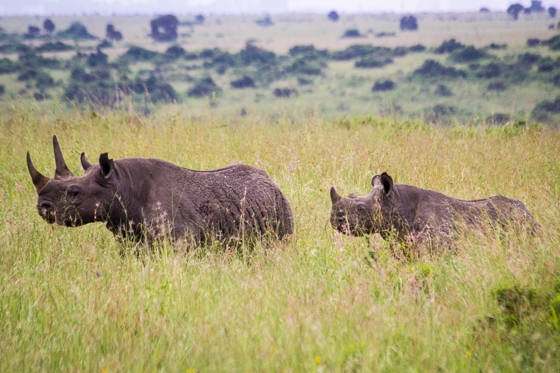 2. Bring a good DSLR camera and a high-quality zoom lens. You’re traveling to the other side of the world – trust me when I tell you that you’ll be glad you invested in a good camera to document to experience. You don’t even have to buy one; you can rent a DSLR and a wide variety of lenses online.

I shot nearly all of my pictures with my  Canon EOS Rebel T3i DSLR and this Canon 70-300mm f/4-5.6L IS lens which is CRAZY EXPENSIVE. I rented the lens for about $15 per day. 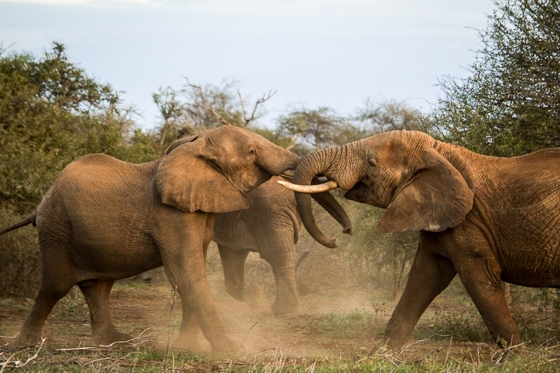 3. If you can, bring a back-up camera in case your DSLR goes on the fritz. Even an inexpensive point-and-shoot would be better than trying to use your cell phone! You’ll be closer to the animals than you think, but even when you’re close your cell phone camera makes it look like you are far away. Zooming in on a cell camera is kind of a nightmare!

When we were in Mara we made friends with an American anesthesiologist who was practicing at a nearby hospital. She spontaneously decided to fly to the Mara for the weekend to go on safari, and all she had was her cell phone. She ended up asking me to email her my pictures so she could show her friends and family what it was really like! 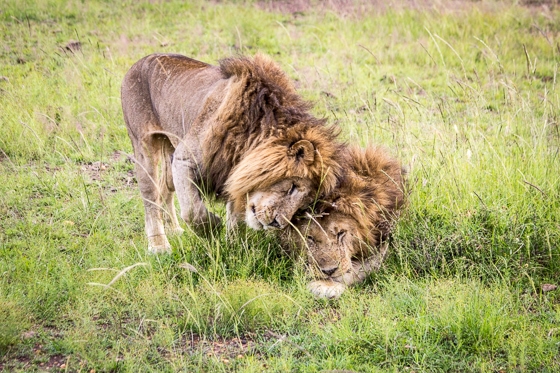 4. Anti-malarial medication gives you CRAZY dreams. We learned pretty quickly not to take the medication at night; taking it with breakfast is a much better idea.

5. I hope you like gin and tonics! Tonic water contains quinine, which has anti-malarial properties, so you’ll likely be offered plenty of these refreshing drinks as sun-downers. I adore gin, but Emily had never had a G&T before our trip! She was broken in pretty quickly, and now she loves them, too. 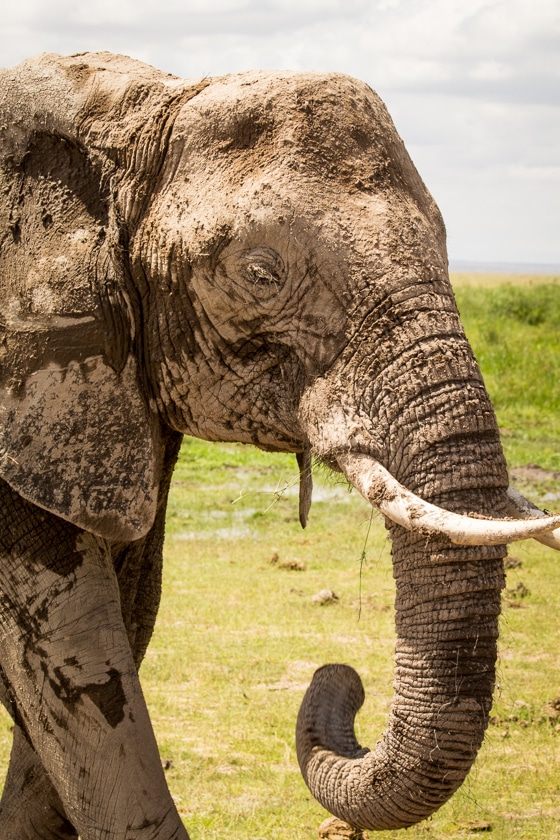 6. Look in the toilet before you sit down. I found little creatures in the bowl a few times (mostly frogs).

7. Ticks. Bring tweezers and antiseptic. That is all.

8. Bring extra camera batteries. And your camera battery charger! I made the mistake of leaving mine on the kitchen counter and didn’t realize until we were already in the bush. I was SO stressed out the entire time, worrying that my batteries would deplete and I’d miss out on the shot of a lifetime. 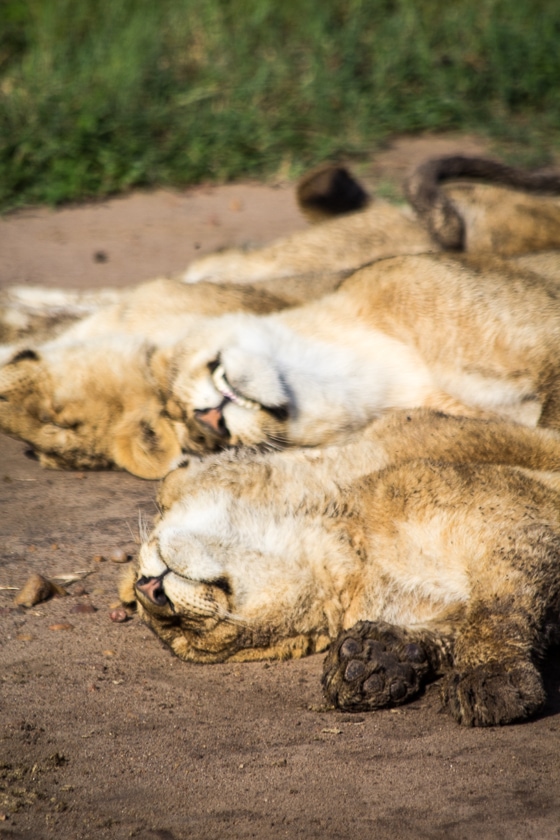 9. Speaking of stressing out about photos… definitely get a few photos of each animal, but you don’t need 400 shots of zebras. Remember to take time to just watch the animals with your own two eyes, rather than always through the viewfinder.

10. Don’t forget to ask other people to take pictures of YOU, especially with the animals! Pics, or it didn’t happen… as they say.

11. You’ll want to stay longer than you think. Emily and I would have gladly doubled or tripled the length of our trip if we could. I wanted to cry on the way back to the airport; I can’t WAIT to go on safari again. If you’re going to pay for the airfare to get there, you might as well add on a few nights! 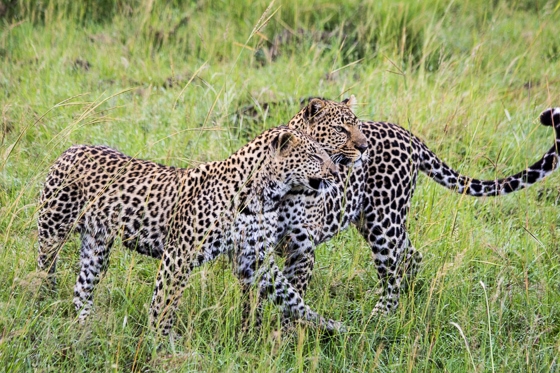 12. If you book your safari through a tour company (rather than, say, renting a car and going on self-drives), check with the tour operator ahead of time to inquire about the expected game drive times. Some do quick 60-90 minute drives three times per day, others go out for 12 straight hours. You’ll also want to make sure that you have the option to go on drives at different times of day. Early morning drives are great, as many animals are more active before it gets hot during the middle of the day.

13. Don’t skip a single game drive. If you do, that will be the one when everyone else sees a baboon riding a hyena riding a leopard. Or, you know, lions on “honeymoon.” 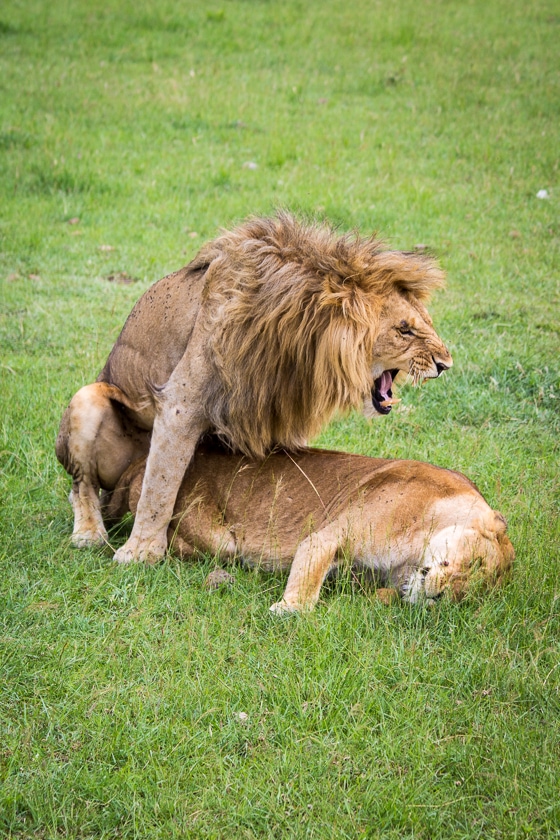 14. Go on a night drive if you can, but don’t expect to get good pictures (unless you bring professional equipment). Let your night drives be the time that you put the camera away and just watch.

15. Don’t be surprised if you find yourself fording a river in a land rover. Game drive vehicles are typically equipped with snorkels to prevent the engine from flooding. 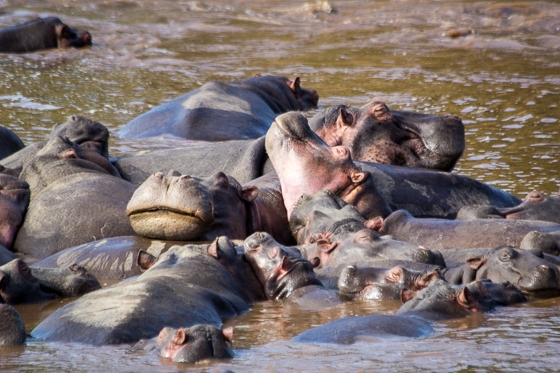 16. Research exchange rates ahead of time so you know how much cash to get out of the ATM at the airport. While many places (and guides) accept USD for payment or tips, it’s nice to have the local currency. Also, if you are trying to use USD make sure they are NEW bills.

17. Africa Time is a real thing. Don’t expect to always leave on time, but make sure YOU show up on time! You don’t want to be the person holding everyone else up.

18. Bring Dramamine and/or Seabands. Even if you aren’t flying on any small planes while you’re there, the “roads” get REALLY bumpy. Emily puked, like, three times. I didn’t at all because I’m awesome. 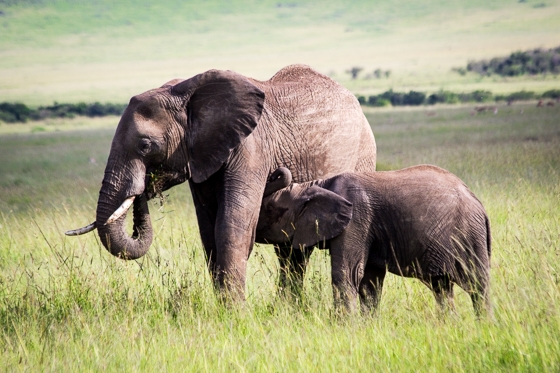 19. The showers will be short and cold. Deal with it! Here’s the best way to get clean: Turn on the water and rinse quickly. Turn off the water, soap up, and wash your hair. Turn the water back on and rinse. Turn it off again to condition your hair (if you do that kind of thing) and shave your underarms (no time for legs, this is Africa!). Rinse one last time and pray that you left enough hot water for your cabin-mate. Emily and I rotated who got to shower first each time.

20. Bring along a jacket that has lots of zippered pockets. You’d be surprised how much stuff you may want with you, especially if you’re out on a 12 hour game drive. Chapstick, extra batteries, camera lenses, toilet paper, etc. I lived in this jacket the whole time I was in Kenya.

21. Bring less clothes than you think you will need. You can easily wear the same clothes a few days in a row; no one is going to notice, especially not the animals. Dragging luggage around just isn’t very fun. 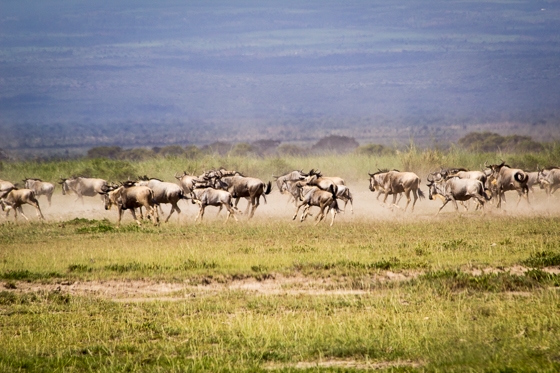 22. Laundry needs two days to dry, especially in areas of high humidity! Nylon clothing is your new best friend. It’s light, breathable, and versatile. Most convertible pants look super dorky, but these are fashionable enough to wear in the city or take on a camping trip. They somehow seem to keep me cool when it’s hot out, warm when it’s cold out, and they dry almost instantly if they get wet.

23. Don’t bother with brand new clothes. On a short flight between Nairobi and the Mara, my sister and I sat next to a couple who were on their honeymoon. They stood out to me because they were dressed in head-to-toe khaki and had not a spot of dirt on them. I was amused, because they reminded me of Emily and myself just a few days earlier. As it were, we were coming from Amboseli and had been caught in a flash flood the day before. Our rover got stuck in the mud for nearly two hours on our way to the airstrip, so Emily and I were absolutely covered in mud. We got a few funny looks on the plane, but it kind of made us feel like safari veterans. I guess that the moral of the story is that you’re going to get dirty, you don’t need brand new clothes, and everyone looks dorky in head-to-toe khaki. 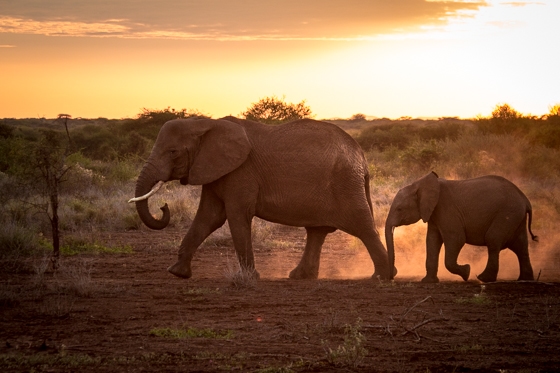 24. If you’re staying at tent camps, you likely don’t need to worry about “dressing for dinner.” However, if you elect to stay at a high-end lodge, check ahead of time to see if there are special regulations for dinner wear.

25. Do not bring any camouflage clothing. In many places camouflage is only worn by soldiers and is prohibited for civilians.

26. Remember, you’re going to Africa, not to the moon. You don’t need to buy (and pack) a bunch of crap you’ll never use again. Bring hand luggage only, and remember that many of the small planes you’ll take between airstrips only allow soft-sided luggage (no “suitcases”). We fit all of our gear in this one carry-on sized backpack. 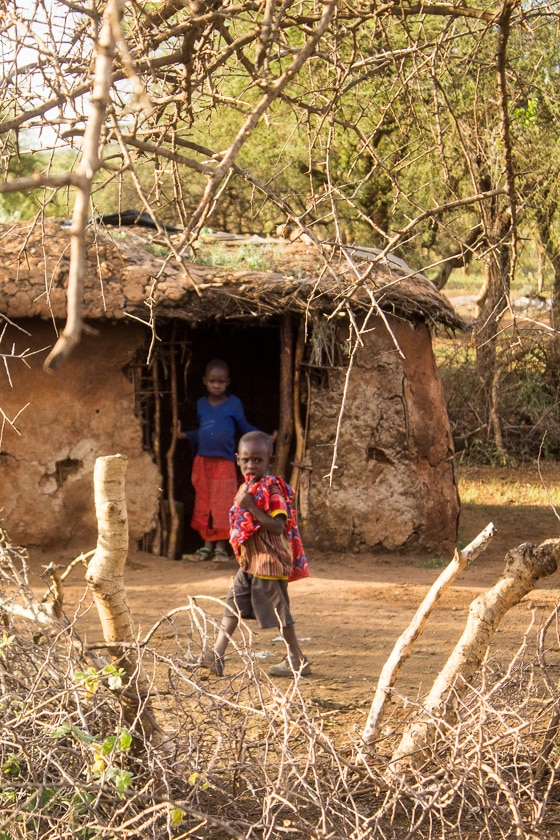 27. But seriously, bring a headlamp! We used ours anytime we had to walk outside after dark, and for reading in bed. SO useful.

28. Oh, and don’t forget to bring an extra bag (soft-sided, easily collapsible) for all of your souvenirs.