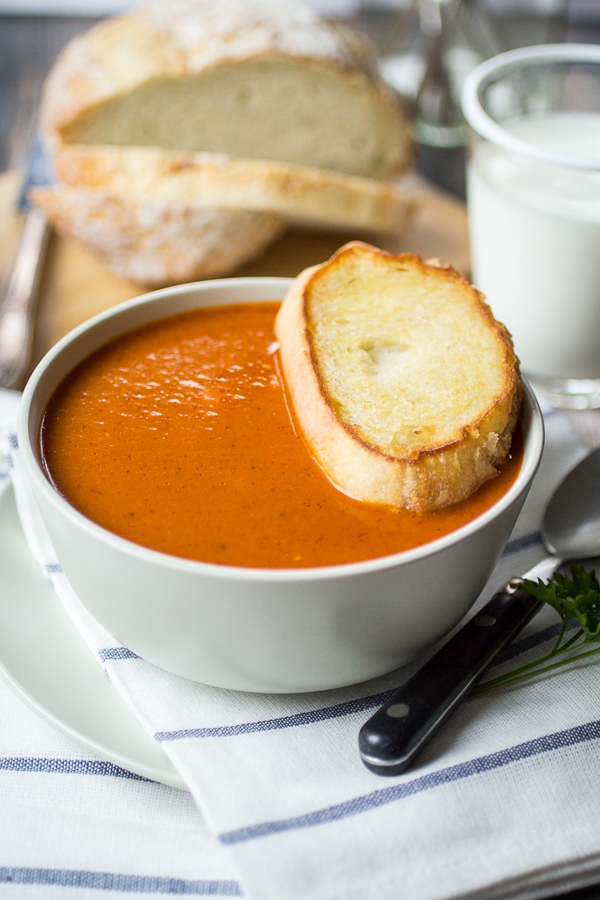 Friends, this is the season for SOUP!

It’s cold outside, I’m lazy, and soup is warm and easy.

Every time I make soup I enjoy a meal or two from the pot, then transfer the rest into pint-sized freezer jars. My freezer is absolutely stock-piled with mason jars filled with soup! It makes lunch time super easy, and is great for those days when I don’t have the energy to get myself to the grocery store.

Here’s the low-down on how to make this delicious (and freezer-friendly!) red pepper and sun dried tomato soup. 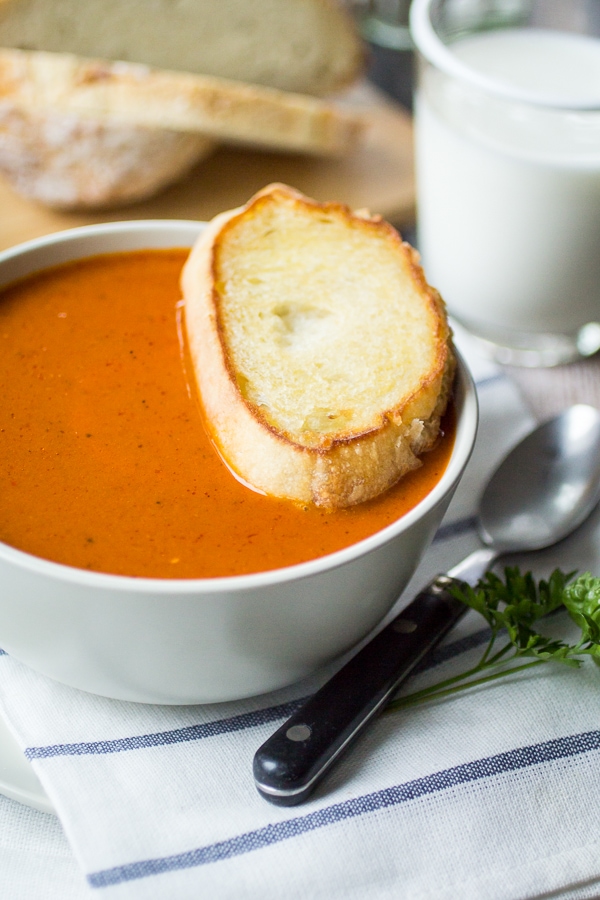 Start by blistering a red pepper. Either use heat-safe tongs to hold the pepper over a gas flame, or slice it in half, seed it, and broil skin-side-up until black spots begin to appear.

Put the pepper in a bowl, cover with foil, and allow it to steam for 10 minutes. Once it’s cool, run it under cool water and rub away some of the tough skin.

When rubbing the skin off the peppers, just remove the parts which come off easily. No need to sit there and pick at it like it’s a three-week old shellac manicure.

Drain a jar of sun-dried tomatoes and reserve the oil. A lot of recipes call for the dry kind of tomatoes, but those taste weird to me. I like using the oil-packed variety because then we get to use the oil from the jar, too! The oil in the sun dried tomatoes is already seasoned, so there’s no sense in not using it. Try drizzling some over some avocado toast. It’s pretty epic.

Next, a bunch of stuff gets chucked in a blender. 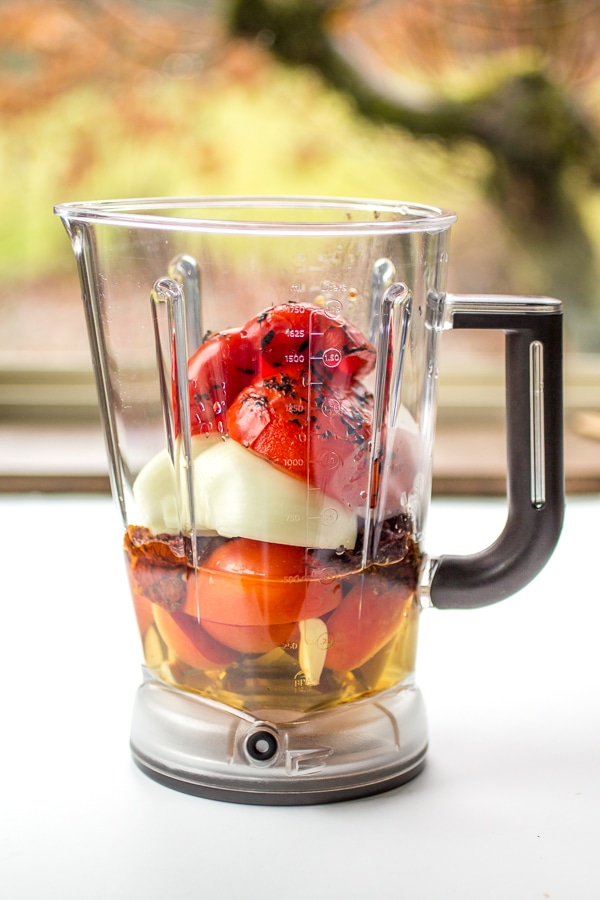 Use a blender that you trust (I used my torrent blender) – most soups make you sauté everything ahead of time, then transfer piping hot liquid to a blender. Using a blender that can handle soups and sauces means it does all that hard work for you.

See how there are still black spots on the skin? The blisters add a smoky-charcoal flavor to the soup, while the sun-dried tomatoes provide robust tomato flavor. 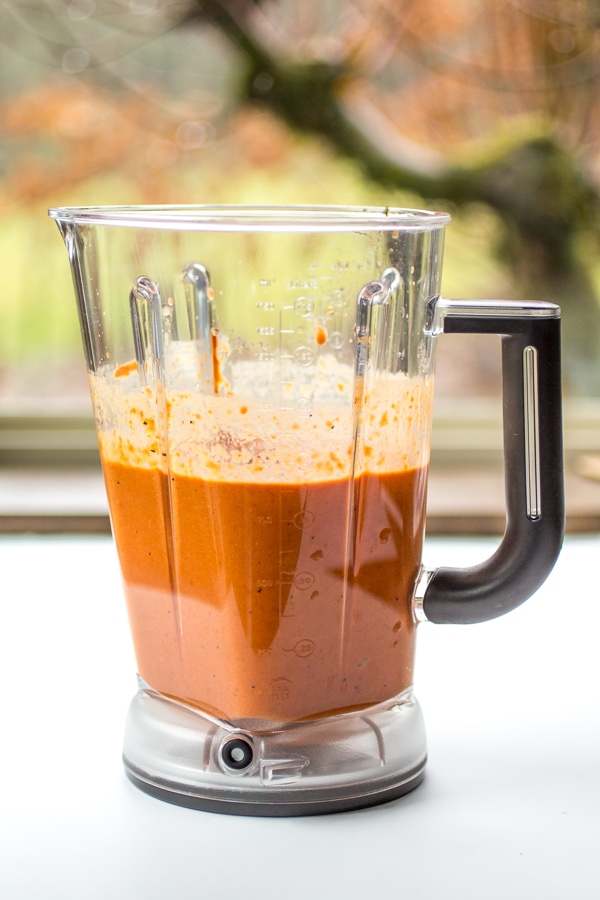 Heat a few tablespoons of the reserved oil from the jar of dried tomatoes in a saucepan over set over medium heat. Once the oil is shimmering, carefully pour in the soup and stir. Let it cook, stirring constantly, until it begins to darken in color. Add some more broth, then turn the heat down to low and let it simmer until you can no longer taste or smell raw onion.

Season with sugar (which helps bring out the flavor and temper the acidity of the tomato), salt, and pepper. 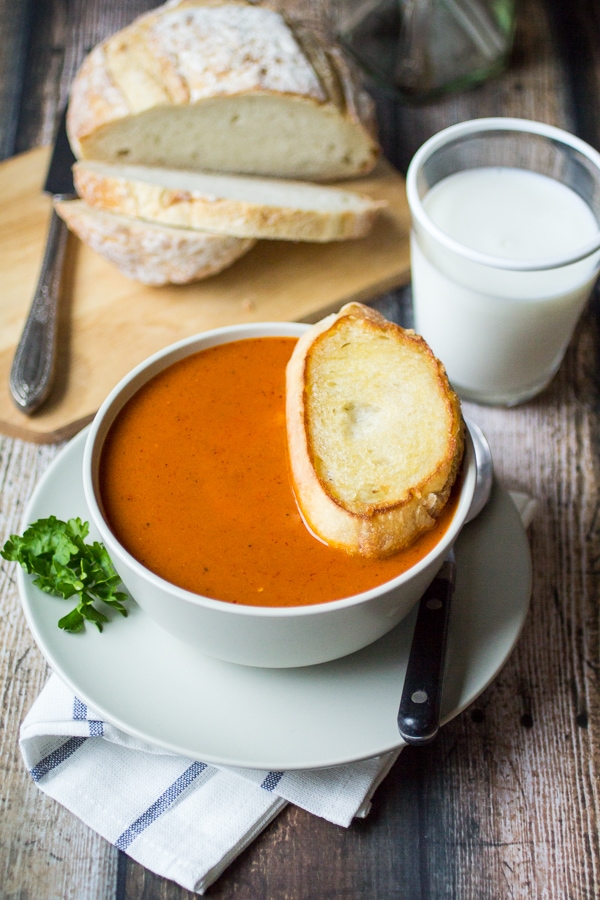 Buttery bread is a non-negotiable requirement, as is serving it with a glass of milk. 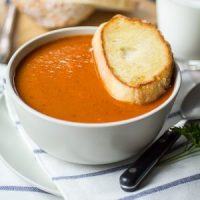