This Greek Fish En Papillote recipe is inspired by Greek flavors. It is healthy and done in just 20 minutes. It is pretty and fun to serve to company. The fish just looks so impressive when they open up the little packets! It’s super yummy! 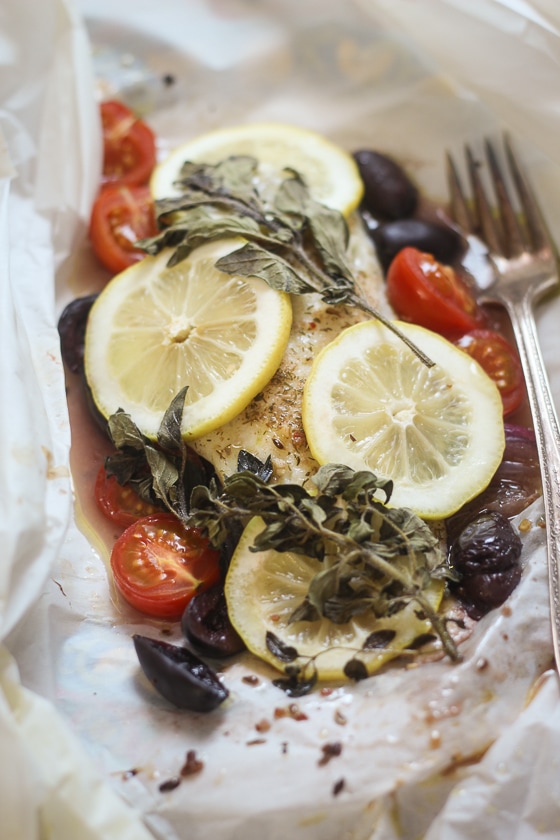 Okay, I’m making good on my promise to come back from my trip and share Greek recipes with you! Consider this the first of many: Greek Fish en Papillote!

Let me tell you why I’m so excited to share this recipe with you.

It is inspired by Greek flavors, which I’m currently obsessed with since we just got back from our trip to Greece and Turkey.

It is healthy and done in just 20 minutes. Who doesn’t need more meals like that in their dinner rotation?

It is a packet cooking recipe! This is one my favorite ways to cook (especially when I’m camping!).

It is pretty and fun to serve to company. The fish just looks so impressive when they open up the little packets! 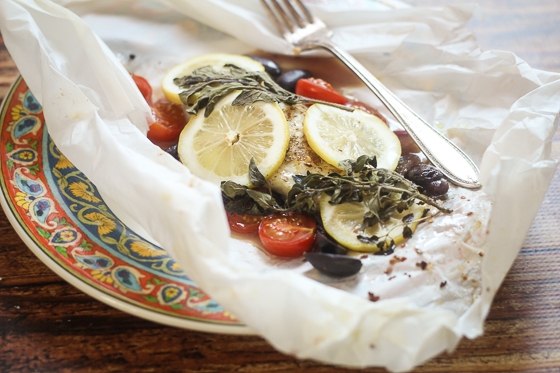 Oddly enough, I developed this recipe *before* we went to Greece.

I think I was just super excited about all of the wonderful food we were going to eat and couldn’t wait any longer to start enjoying the Mediterranean-style cuisine.

I really should have just waited, because by the time we got back from Greece I was feeling a little bit tired of this kind of food.

You can tell by my recipes that I like to eat a wide variety of dishes and cuisines throughout the week, so two straight weeks of Greek food was kind of pushing it for me. 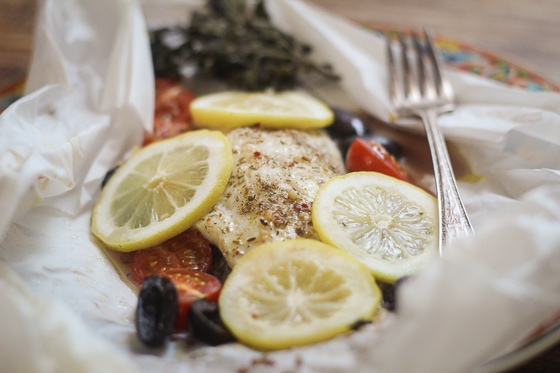 The good news is I can officially tell you that this recipe has authentic Greek flavor!

Let me give you the run-down on how to make it. First, layer all of the yummy ingredients together on a piece of parchment paper (use a roll of this 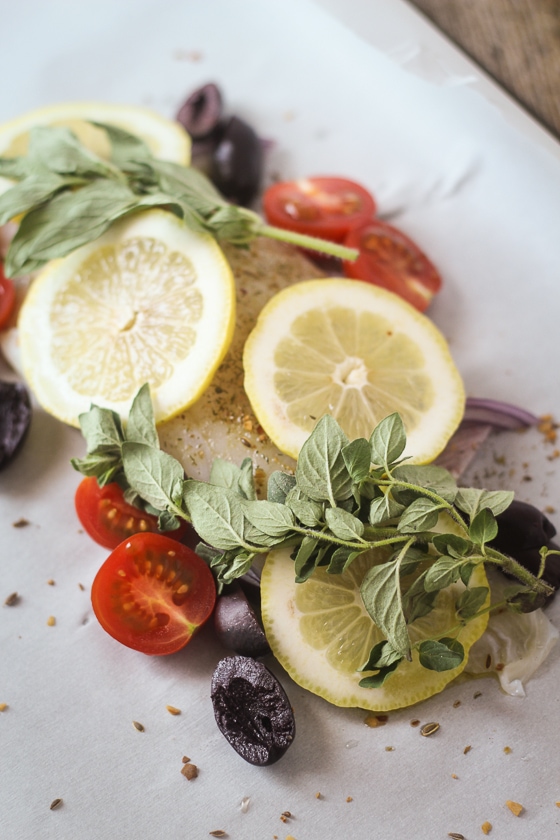 Seal up the packet, put it on a baking sheet (I like these ones by Caphalon 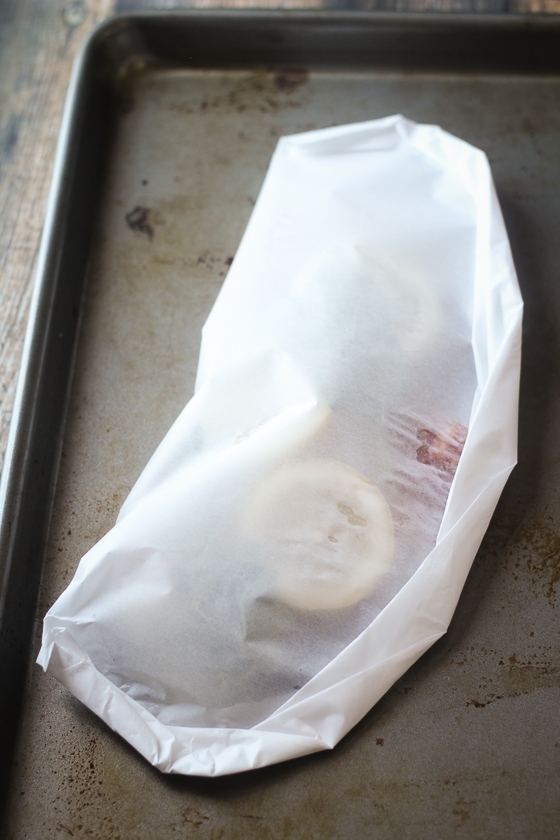 Here comes the fun part: open up the packet, and take a big whiff of that incredible lemon-oregano aroma. 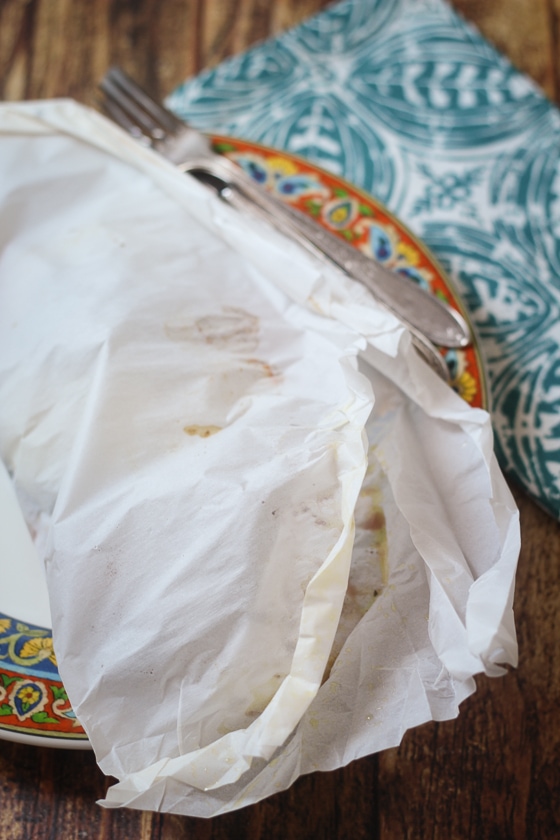 Grab a fork, and dig in! 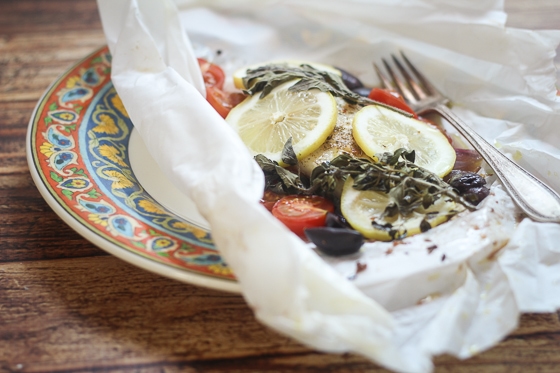 If you can’t find the Greek seasoning mix at your grocery store, then you can get it from Amazon here.

Ready to get in the Mediterranean-mindset? 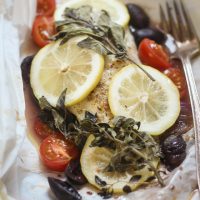 This Greek Fish En Papillote recipe is inspired by Greek flavors. It is healthy and done in just 20 minutes. It is pretty and fun to serve to company. The fish just looks so impressive when they open up the little packets! It's super yummy!
5 from 1 vote
Pin Rate Save Saved!
Course: Main Dish
Cuisine: Greek
Prep Time: 8 mins
Cook Time: 12 mins
Total Time: 20 mins
Servings: 2
Calories: 386kcal
Author: The Wanderlust Kitchen
Print Recipe