The secret to good gumbo? Starting with the perfect roux. Try my trick for oven-toasting your flour to free up your hands, time, and sanity! 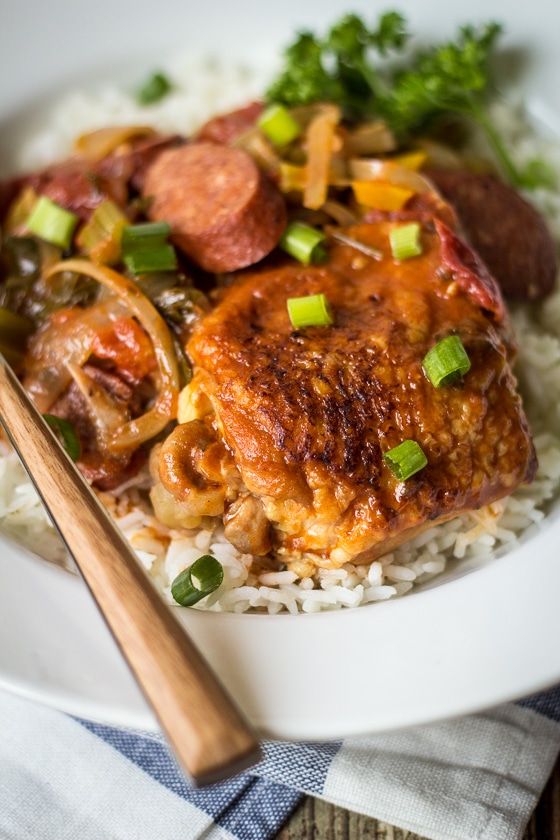 On the surface, it seems so simple. Just chicken, vegetables, sausage, and sauce, right?

Nope. Gumbo is much more complex than the sum of its parts. The reason? The roux. (say it with me: “roo”)

Gumbo is just ALL about that roux. 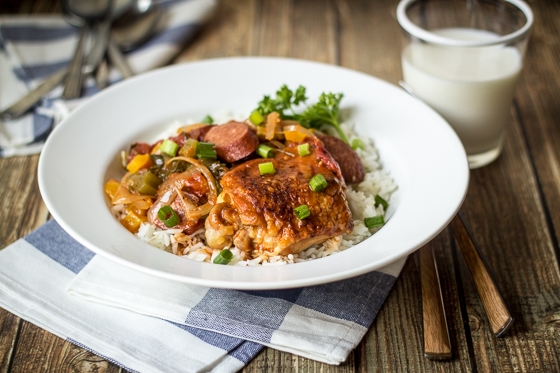 When I visit New Orleans, I enjoy some of the best food of my life!

One of my favorite memories of New Orleans was attending a cooking class where we learned to make crepes suzette and classic gumbo.

The main point that the instructors kept repeating was to start with a good roux. Making a good roux is a source of pride for many home cooks, as well as restaurateurs, and it can take some time to get it right.

Basically, you heat some fat in a pan (usually butter, but you can also use oil, bacon grease, or, my favorite, fond and meat drippings), then add flour and whisk until the raw flour taste is gone and the roux has achieved the right color. 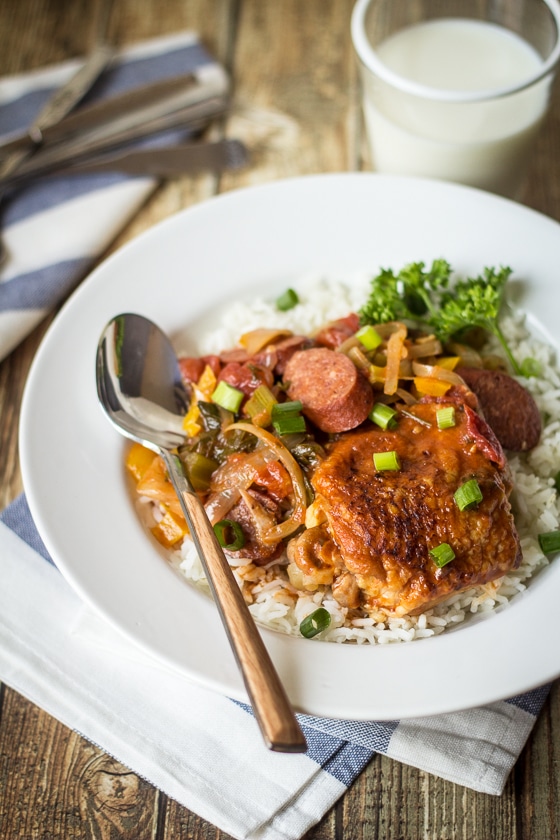 For macaroni and cheese, you only need to cook the roux until the flour has lost its raw taste, about 3-5 minutes. For gumbo (and Jambalya!) you cook the flour and fat mixture until it turns a deep brown color and the roux tastes nice and toasty. This can take about 45-60 minutes! Don’t forget, you’re supposed to be whisking almost constantly while you’re doing this.

Now, you all know how lazy I am. After 45-60 minutes of whisking roux on the stove-top I’d be hangry. We just can’t have that.

The gals at the cooking school let me in on a little secret: you can buy dark roux pre-bottled! I haven’t tried this stuff yet, but I might pick some up and keep it on hand for emergencies 😉

For those of us who don’t keep roux on-hand, there’s another option! I read about a method for toasting flour in a Good Housekeeping Cookbook I found at a garage sale, so I thought I’d try it out for making this Creole Chicken and Sausage Gumbo.

Essentially you’re just baking some flour in a skillet, then using that flour to jump-start the toasty flavor and chocolate color of dark roux. Brilliant! 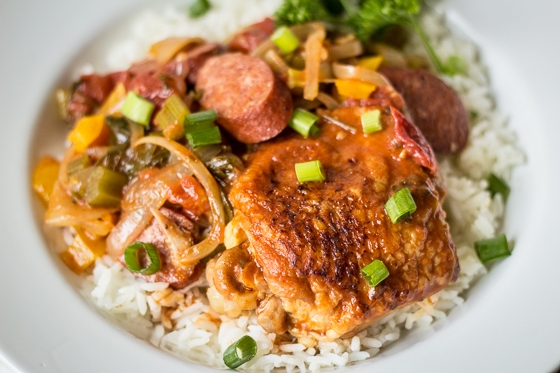 This gumbo recipe doesn’t include okra, but if you want to include it, just thinly slice two medium okras and add them in along with the onions, bell peppers, and other veggies.

This recipe is not nearly as complicated as it looks! When your whole house smells cozy and you take that first taste of velvety sauce, you’ll understand why gumbo is revered as a true comfort food. 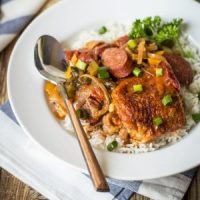 Prevent your screen from going dark

You may need to cook the chicken in batches if they won't fit in a single layer in your pot. *If you like, you can continue to cook it until it achieves a darker color, another 5-10 minutes. This recipe doesn't include okra, but if you want to include it, just thinly slice two medium okras and add them in along with the onions, bell peppers, and other veggies.
Nutrition Facts
Creole Chicken and Sausage Gumbo Recipe
Serving Size
1 serving
Amount per Serving
Calories
270
% Daily Value*
Fat
16
g
25
%
Saturated Fat
5
g
31
%
Polyunsaturated Fat
10
g
Cholesterol
55
mg
18
%
Sodium
859
mg
37
%
Carbohydrates
18
g
6
%
Fiber
2
g
8
%
Sugar
5
g
6
%
Protein
16
g
32
%
* Percent Daily Values are based on a 2000 calorie diet.