This delicious (and Vegan!) Chickpea Tikka Masala recipe hits the spot when you’re craving Indian food. Serve it up over rice and garnish with plenty of fresh cilantro! 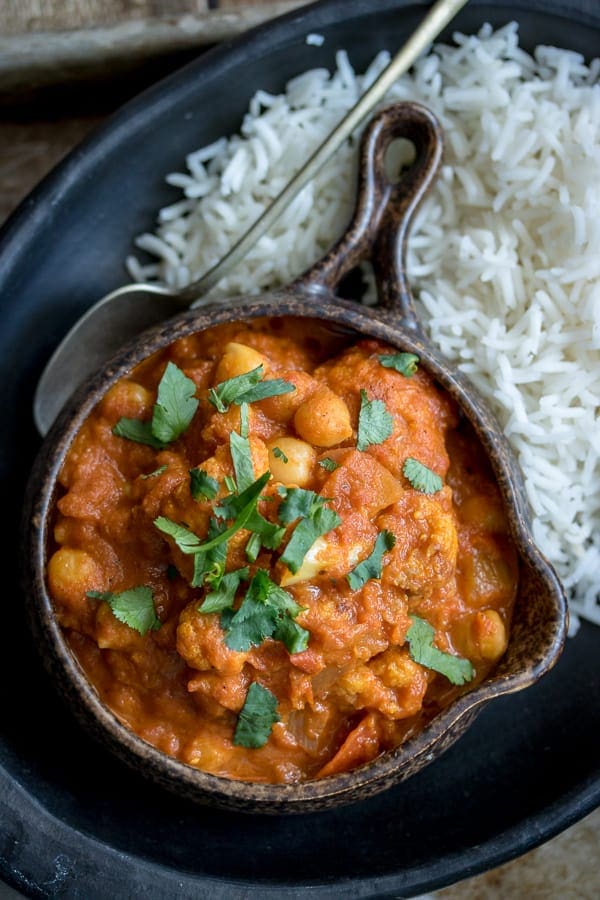 So you may have noticed that I’ve been sharing lots of plant-based recipes.

I switched to sharing only meatless recipes three years ago. While I’ve dabbled in vegan recipes in the past, I’m only recently getting really into eating a plant-based diet.

Of course, you are always more than welcome to make adjustments to suit your own diet. You do you!

Indian food has always been one of my favorites, but I love it even more because it’s so easy to make vegetarian or vegan.

In fact, I have almost twenty vegetarian and vegan Indian recipes in the archives!

When I’m looking for a plant-based way to get my daily protein, there are always plenty of Indian chickpea recipes I can whip up.

Now I have another go-to recipe to add to my meal-prep schedule: Vegan Chickpea Tikka Masala! 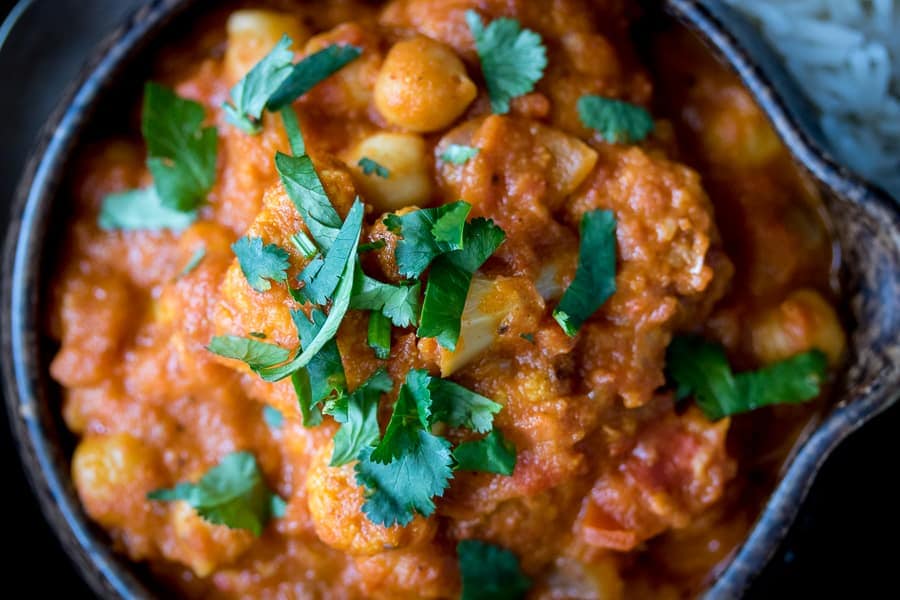 Let me tell you all about this delicious chickpea masala recipe.

I can’t get enough of this vegan masala. It just might be my new favorite comfort food.

It’s easy to fall in love with recipes like this one! 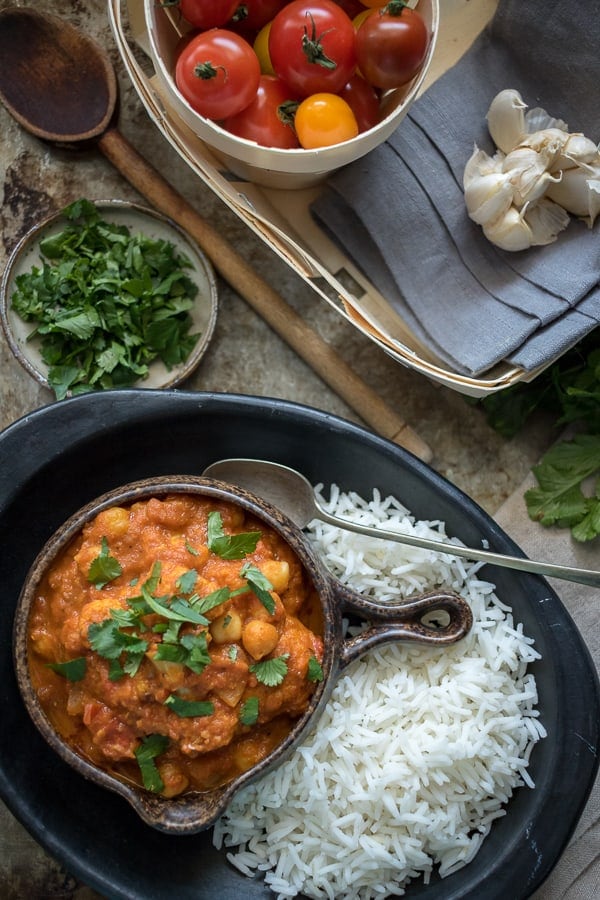 To really nail this recipe, you’ll need about 45 minutes.

Trust me, it is going to be worth it!

Before you start on the vegan tikka masala sauce, pre-heat the oven, season the cauliflower, and start roasting it. 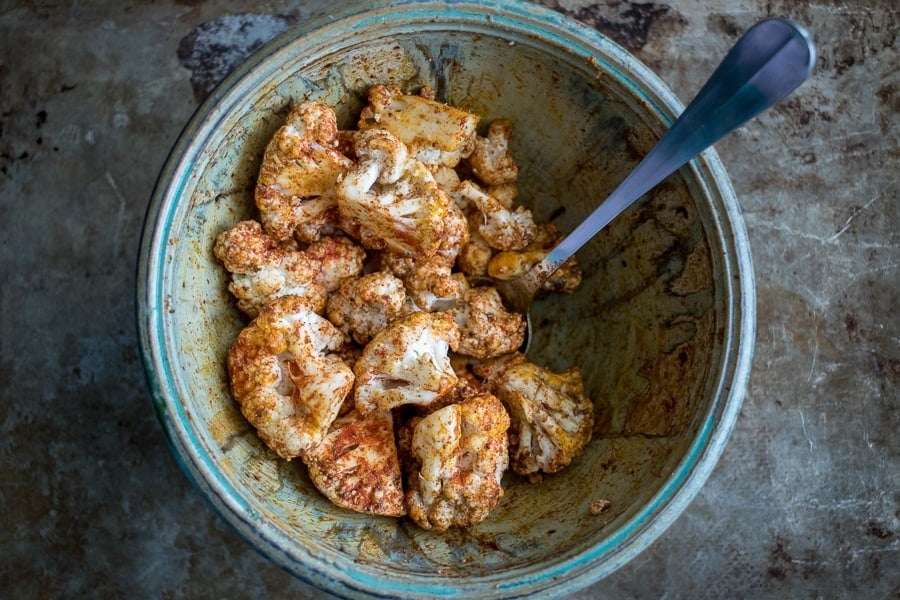 Now, on to the sauce.

To make a bangin’ tikka masala sauce, you don’t need to spend all day toasting spices.

Now, I love freshly-toasted spices as much as the next person. However, I’m on the road a lot and I don’t always have ten jars of spices with me. Also, sometimes you just can’t be bothered, am I right?

Anyway, for this recipe all you need is one spice mix: garam masala.

If you’re going to rely on one thing to make such a big impact on your dish, you should go for the good stuff.

My absolute favorite garam masala mix is from Frontier Natural and is sold on Amazon.

A lot of masala recipes call for diced tomatoes, but not this one. Why? Because I think that biting into a piece of canned tomato takes away from the flavor of the sauce.

The spices and tomatoes get simmered in oil over medium heat along with some fresh ginger, garlic, and onions.

I like to use coconut oil instead of extra virgin olive oil for two reason:

1) the taste of the oil compliments the canned coconut milk we’ll add in at the end, and

2) since coconut oil is solid at room temperature, it provides a more luscious butter-like mouth-feel to the finished dish.

That’s right. I said butter-like mouth-feel. I’m sticking with it.

Now ladle half the sauce into a blender (or use my favorite kitchen gadget, this immersion blender) and puree until smooth. You can skip this step if you prefer a chunkier sauce, but I think this step is what makes the masala sauce *next level*. Transfer the puree back to the pan.

Now fold the roasted cauliflower and chickpeas into the vegan masala sauce. 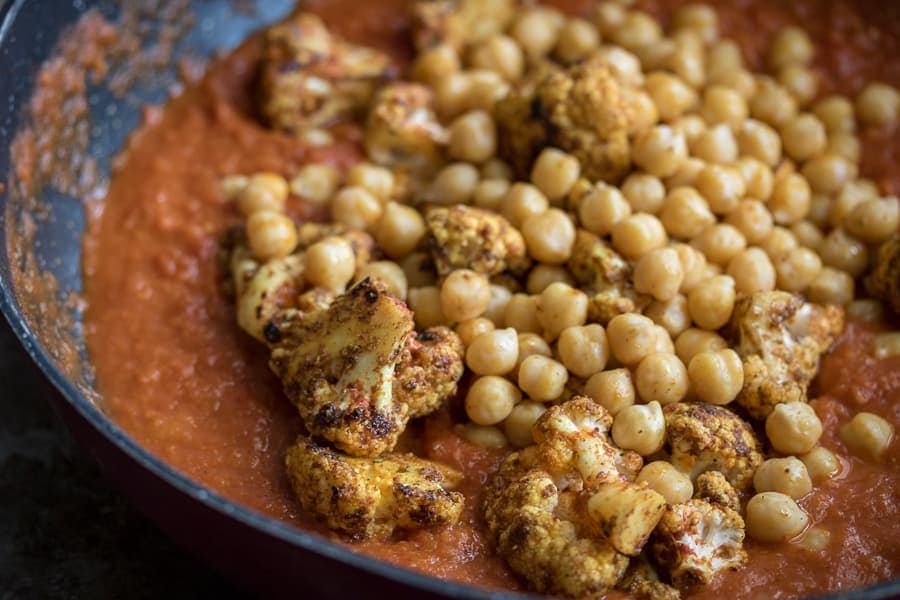 Let it simmer for a bit to infuse the flavors. 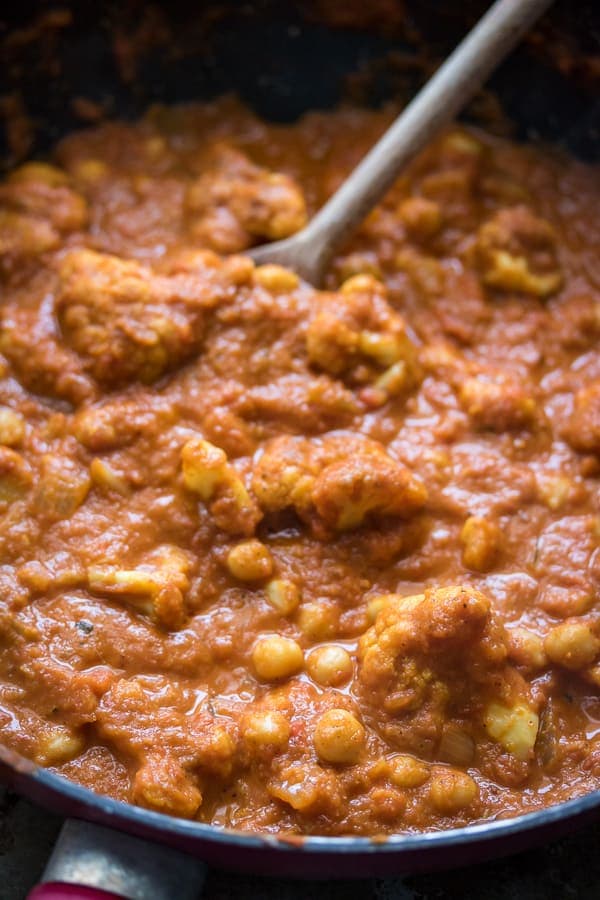 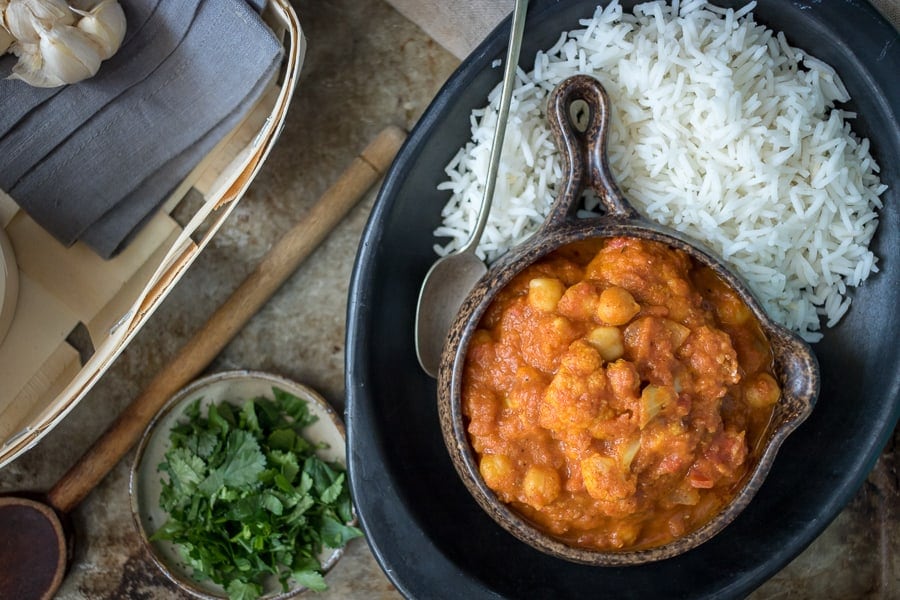 …and garnish with fresh cilantro. 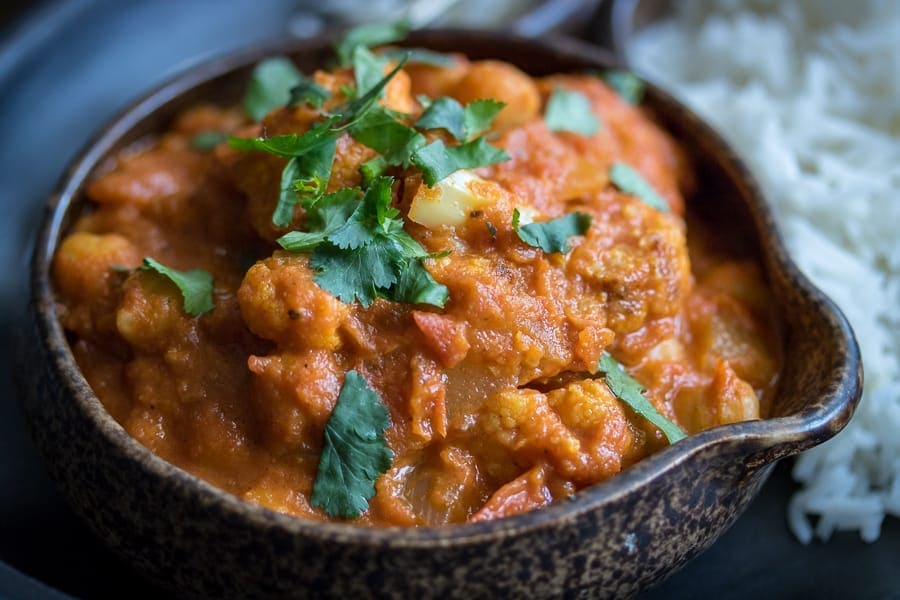 Serve it up with rice and/or naan and you’re good to go! 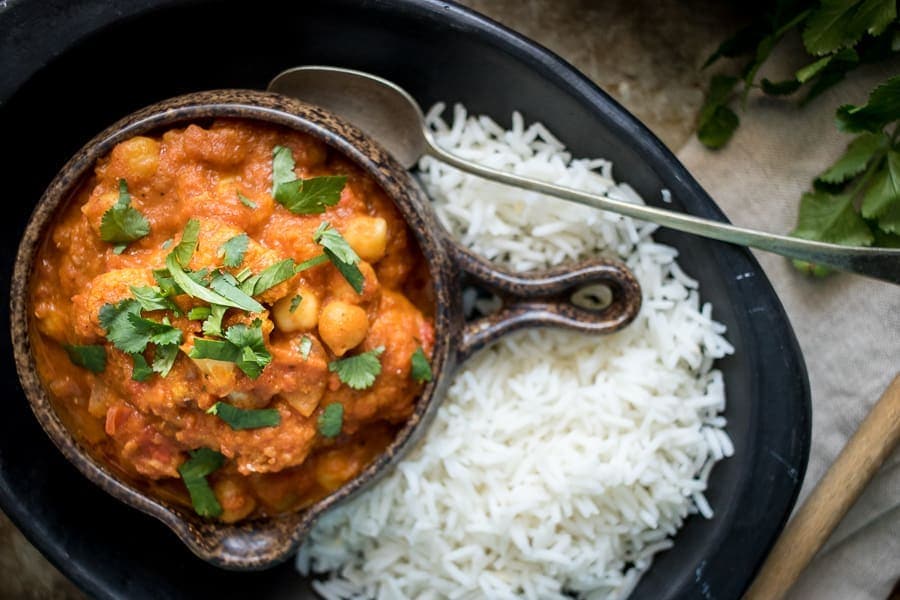 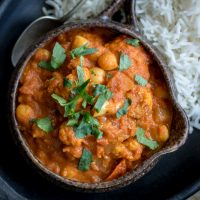 To Prepare the Cauliflower

For the Chickpea Masala

*If you keep your ginger in the freezer it is a lot easier to grate! I use a microplane grater for both the ginger and the garlic. **Alternatively, use a handheld immersion blender to puree about half the sauce in the pan.

Don’t forget to save this vegan tikka masala recipe to your dinner ideas board on Pinterest! 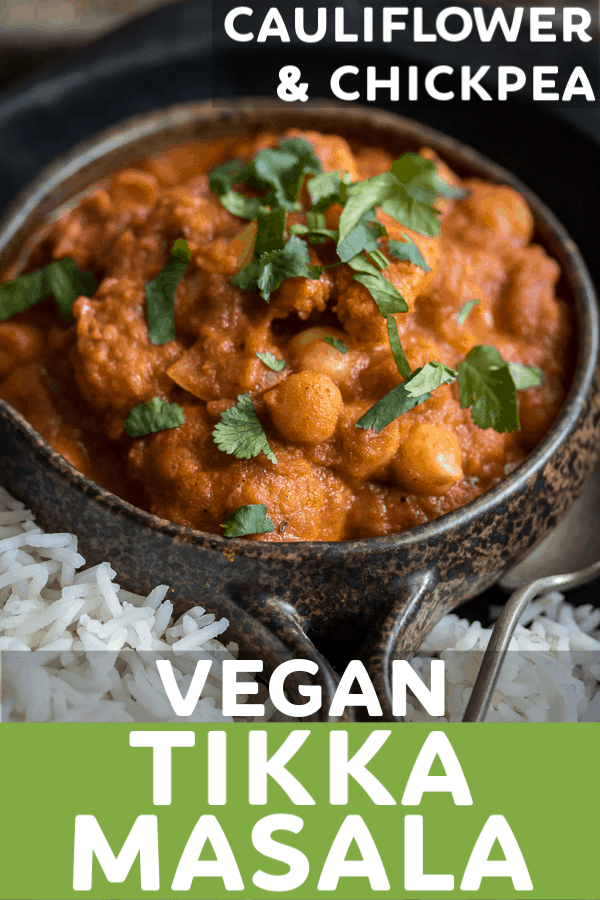