This delicious Shrimp and Chicken Paella is made with broccoli, carrots, and asparagus; then it is topped with the creamy, nutty flavor of Manchego cheese. 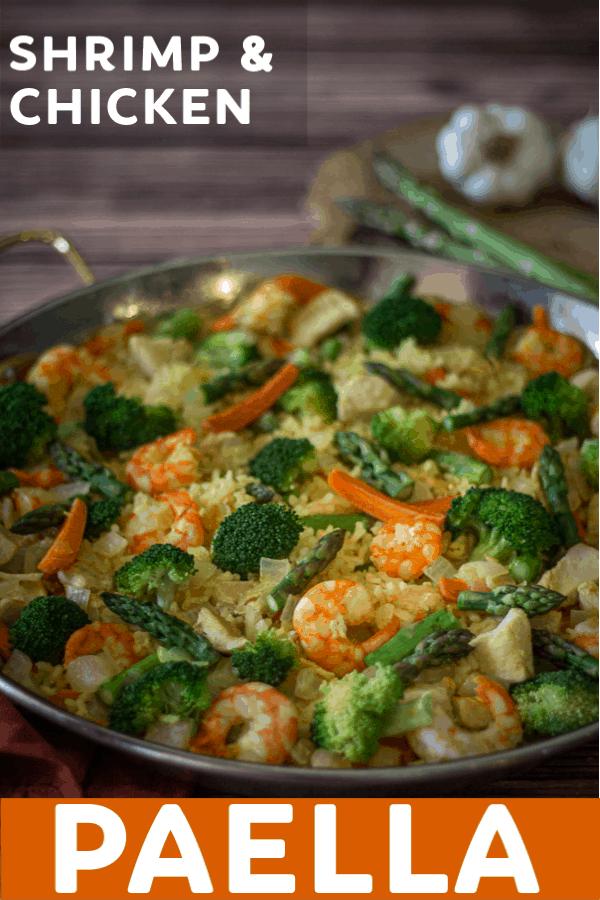 We had the pleasure of traveling to Barcelona, Spain for an anniversary trip several years ago.

It was such a great city, with so much to do and wonderful food to eat, that we eventually took our kids back for a family vacation!

This trip was definitely a family favorite! 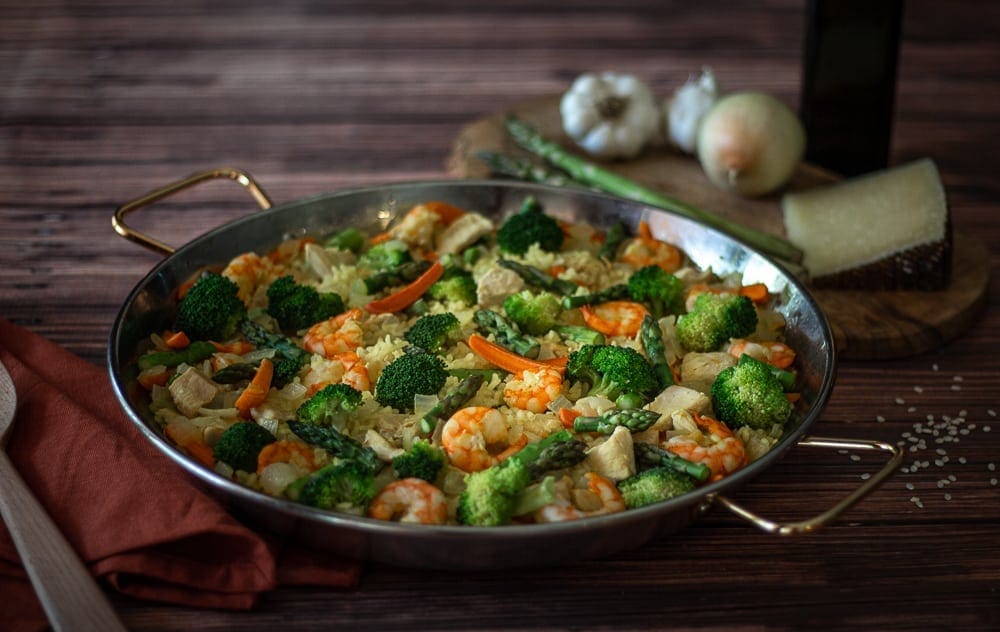 We stayed in a hotel right on La Rambla. La Rambla, or Las Ramblas as called by the locals, is a tree-lined, pedestrian street in central Barcelona that is three quarters of a mile long.

I completely recommend staying in this area, there’s so much to see and do, and you’re within walking distance to everything!

The hotel we stayed at was Arc La Rambla, you can click the link and check prices and availability.

For meals we would venture out and find a little café, with tables right on La Rambla so you’re sitting out in the thick of it all.  So much fun to people-watch, it’s like dinner and a show! 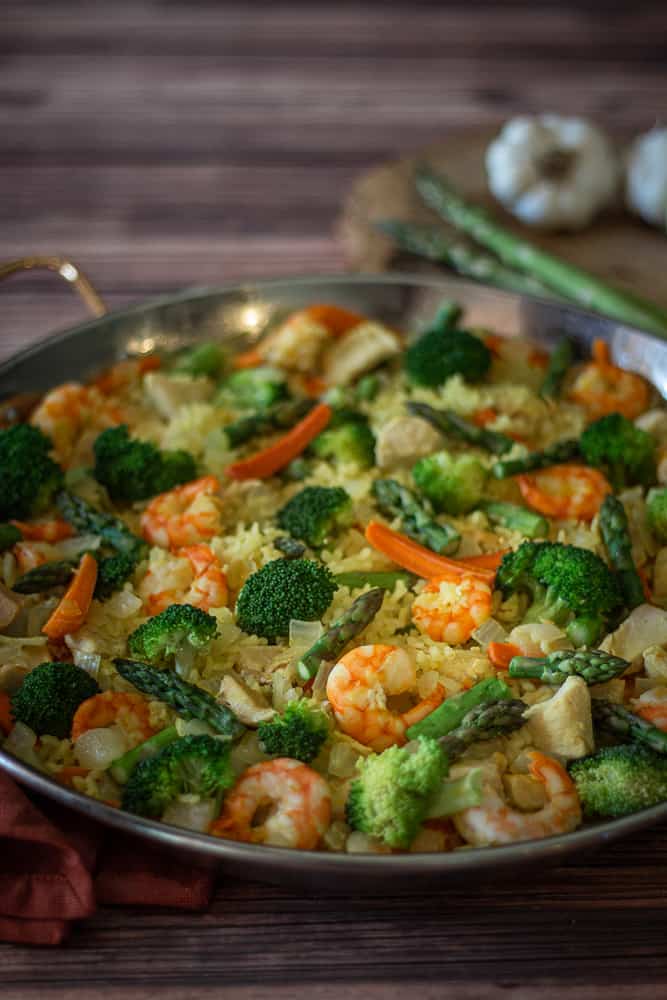 My favorite Spanish food, by far, was the varieties of paella I tried.  I ate chicken and peppers paella, seafood paella, and vegetable paella.  I knew we would have to eat paella again.

You might not have had paella before and may just be asking the question, “What is paella?”

Paella is a Spanish rice dish that has ancient roots. It is made with short grain rice, olive oil and various meats and vegetables. 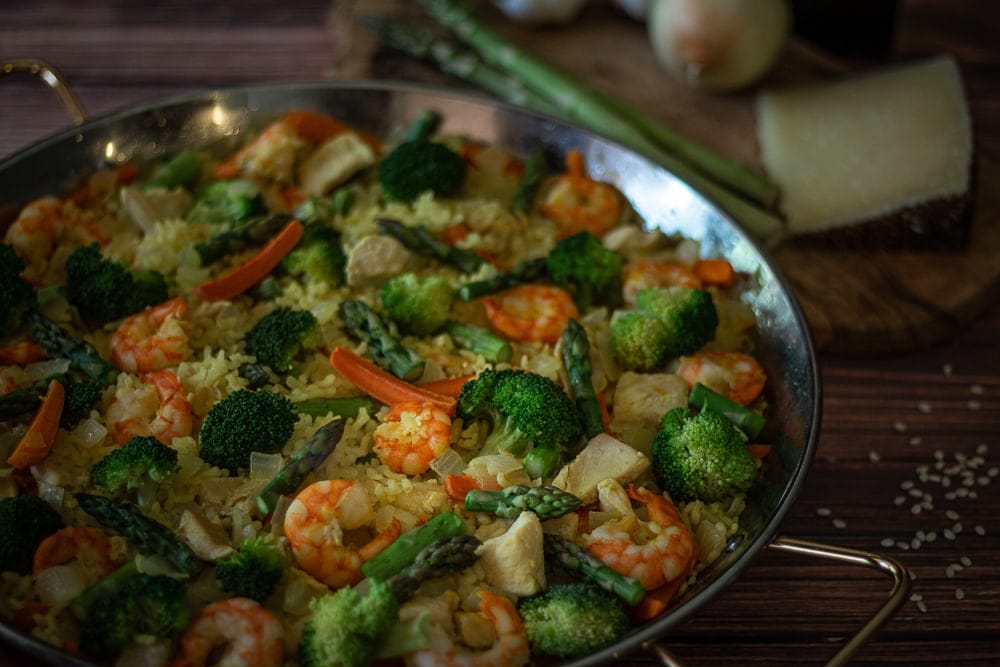 When we came back to home, I told everyone how much I enjoyed eating paella.  My family decided to make my next birthday a “Paella Birthday”!  I wanted to learn how to make paella, so they gave me a kit to do it.

For my birthday gifts, I received:

and Spanish Saffron (choose the Spanish flavor after you click on this link).

and a cookbook with various Spanish paella recipes. 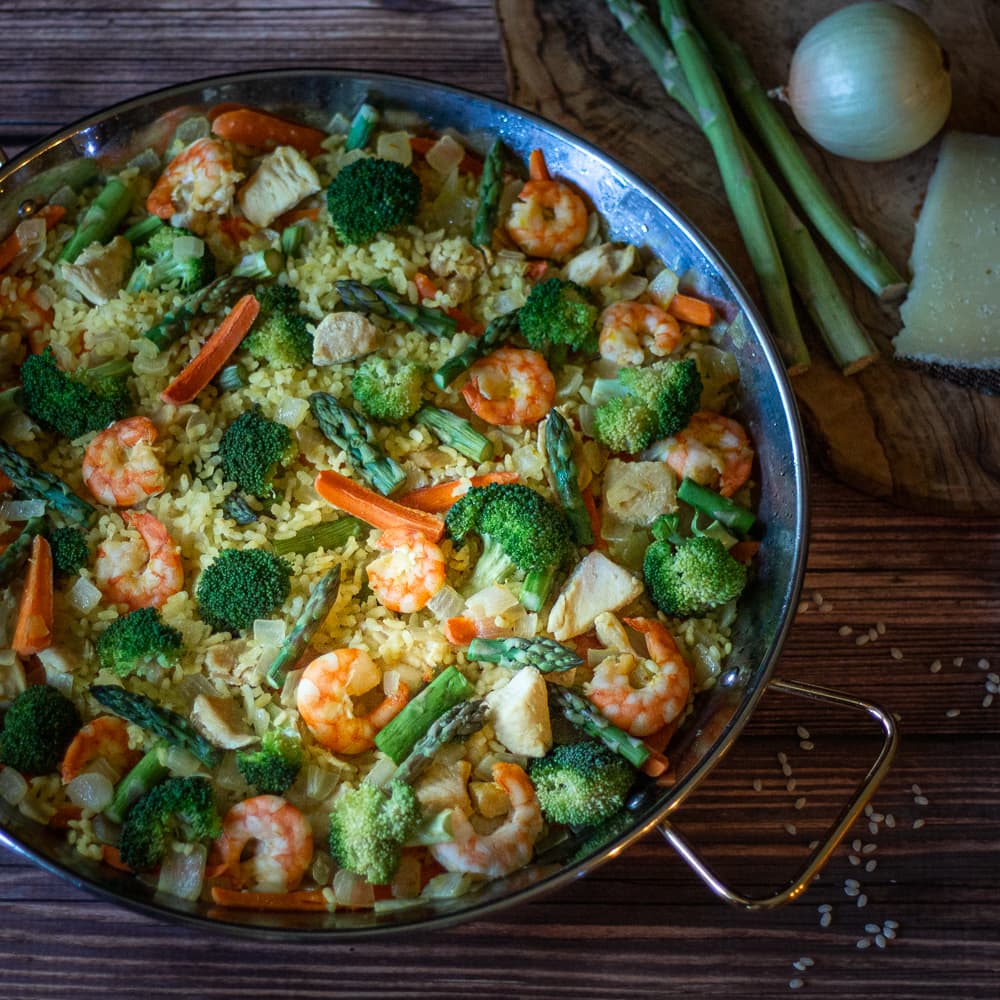 Both Bomba and Calasparra rice are Spanish short grain rice that absorb more liquid than regular rice without becoming sticky or mushy.  The Bomba rice is generally preferred, but a little more expensive.

They are grown in the Designation of Origin (Denominación de Origen, in Spanish and abbreviated as D.O.) Calasparra region are totally free of all pesticides and herbicides. Also, no chemicals of any kind are added during processing and each bag is individually numbered at the farm.  I like that.

It can be hard to find this rice as most grocery stores don’t carry it.  We get ours from Amazon.

We use Calasparra Rice for our Paella Rice, and it tastes great.  The link for the Calasparra rice we use is above, but if you want to use the Bomba, you can get it from this link. 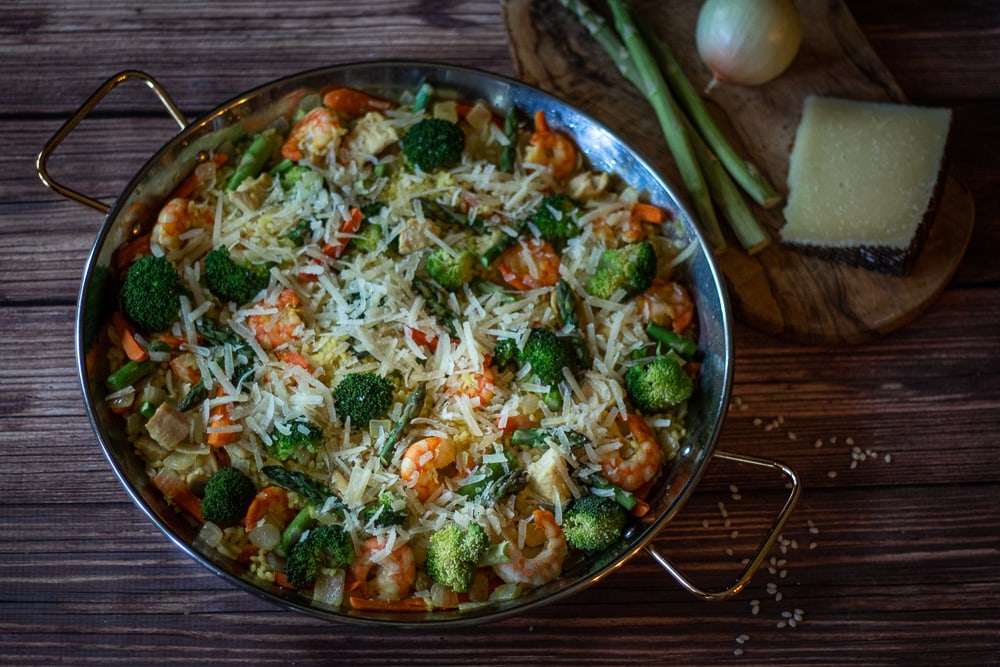 Over the years, I have tried and experimented with several recipes for paella, and tweaked them enough to create this easy paella recipe, and its gluten free.

The Manchego cheese really makes this one special! It’s got such a unique flavor and is quite yummy just to snack on while you cook.

I prefer the more aged Manchego cheese. Its flavor is slightly acidic with a creamy, nutty taste that lingers in your mouth, making you want to take another nibble! 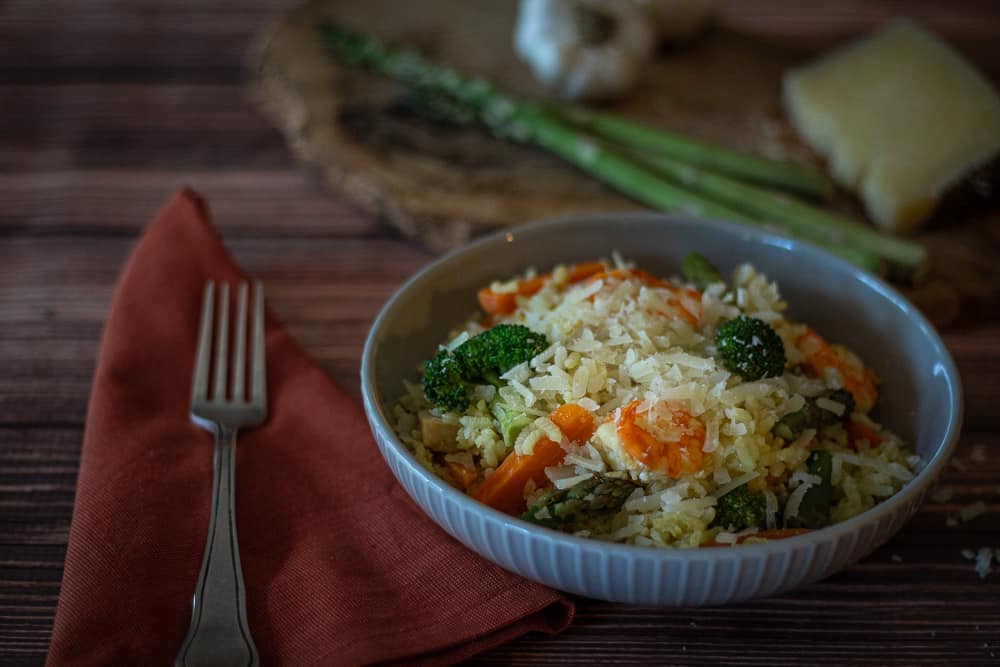 I’ve served this Shrimp and Chicken Paella recipe many times and always got rave reviews from my family and friends!

It’s fun to invite several couples over, serve an appetizer or salad and, of course Sangria, and just visit and enjoy letting my guests watch and participate in the process of cooking the paella!

When it’s done, it’s such a beautiful dish, and so yummy! 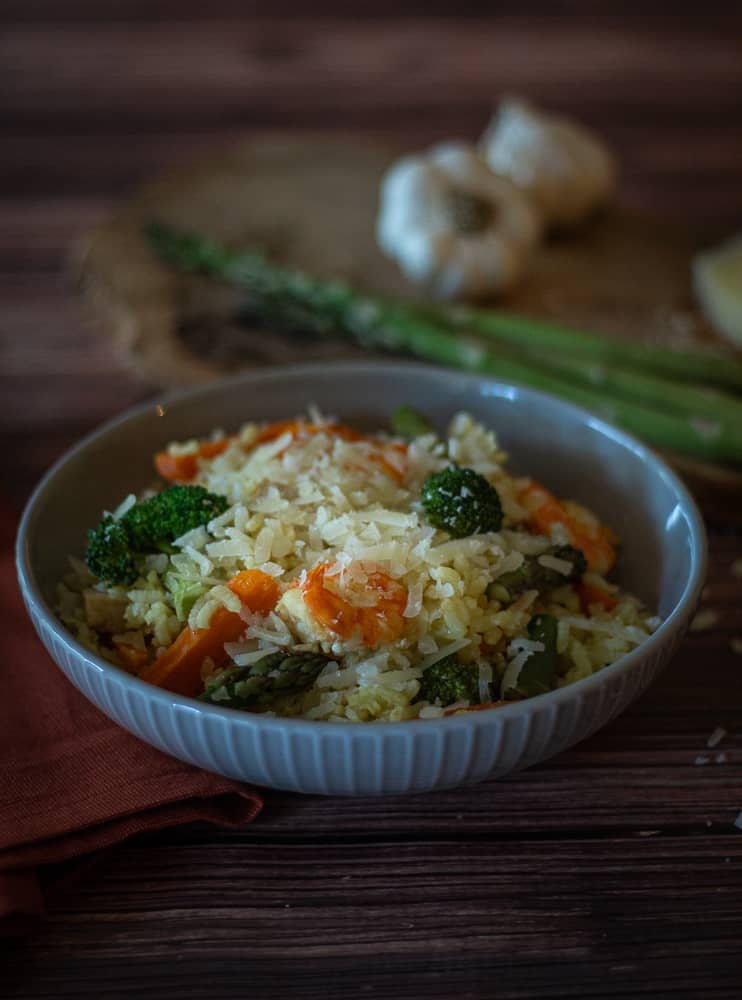 It is traditional to eat paella directly from the pan, but since I use the large paella pan, it seems more acceptable to serve into dishes.  I know some people like to add more Manchego cheese to their dish, so I always have a little extra for this Shrimp and Chicken Paella!

So, now you can make this traditional paella recipe at home.  Give it a try!

If you don’t own a paella pan, then please read this guide on how to choose the best paella pan for you so you get the right size, material and type. 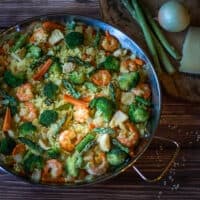 Hi, I'm Linda! Welcome to The Wanderlust Kitchen, where I share recipes and travel adventures from all around the world. Here you'll find a world of recipes you can have confidence in. These recipes celebrate authentic food heritage as well as modern techniques and ingredients. Be adventurous and try a new recipe and travel somewhere you have never been before.  Bon Appétit! Bon Voyage!