This Burst Tomato Basil Risotto with Mascarpone recipe is absolutely divine and with a tasty balsamic reduction! 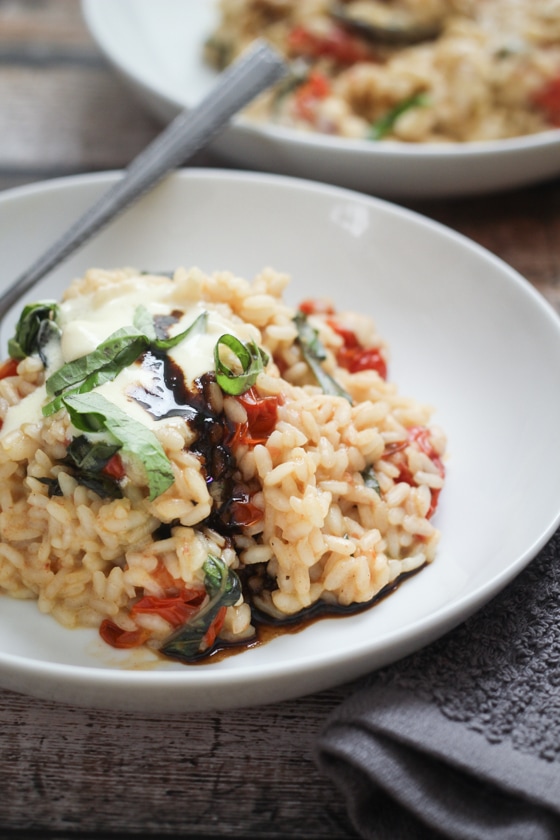 I always feel so fancy when I make risotto.

If you have never made risotto before, this is an easy risotto recipe to get you started, so give it a try. 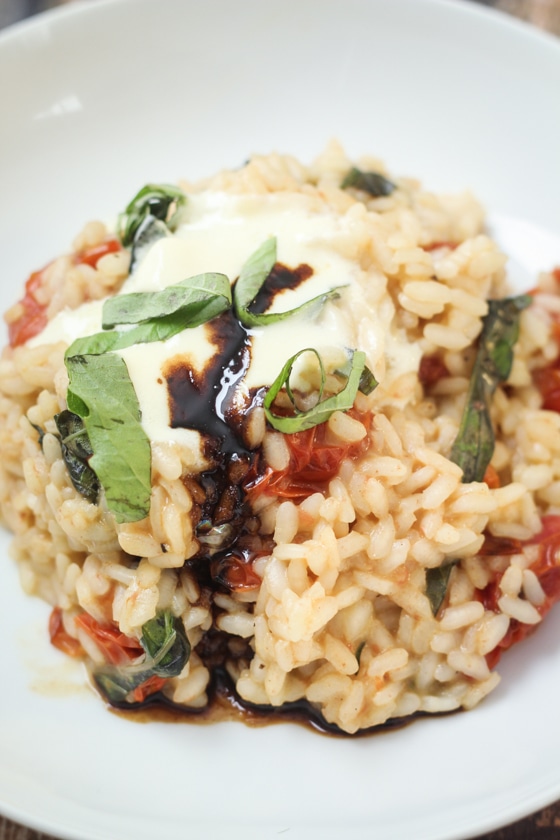 This risotto has some super awesome flavors and ingredients in it, such as:

Burst tomatoes, which are basically itty bitty tomatoes that are dry-fried until they pop open;

Basil, which everyone loves;

Mascarpone cheese, which is like a sophisticated Italian version of cream cheese; and,

Balsamic reduction, which is way easier to make than it sounds.

What is the Best Risotto Rice?

You want to make sure you get the best rice for risotto.

Often, you might only find that the package label says “risotto rice” and that is okay if that is the only option.

The best option is Carnaroli rice. Carnaroli is an Italian medium-grained rice grown in northern Italy. Carnaroli is used for making risotto, differing from the more common arborio rice due to its higher starch content and firmer texture, as well as having a longer grain. Carnaroli rice keeps its shape better than other forms of rice during the slow cooking required for making risotto due to its higher amylose content. It is the most widely used rice in Italian cuisine, and is highly prized. I highly recommend using this type of rice in any risotto recipe, including this one because it makes the creamiest risotto and is the most forgiving when cooking!

The next best option is Arborio rice. Arborio rice is an Italian short-grain rice. It is named after the town of Arborio, in the main region of Piedmont in Italy. Arborio is also grown in Arkansas, California, and Missouri in the United States. When cooked, the rounded grains are firm, and creamy and chewy compared to other varieties of rice, due to their higher amylopectin starch content. Arborio rice is also often used to make risotto. You have to be more careful when cooking this type of rice, as it can overcook and turn mushy.

Another option is Vialone Nano. Vialone Nano is an Italian semifino (medium-grain) rice variety. Similar to the Carnaroli, Vialone Nano is an appreciated risotto rice. While rich in starch (therefore making for creamy risottos), its high amylose content allows it to maintain its shape and absorb much liquid during cooking. This rice also cooks more quickly than Carnaroli, so be careful that you don’t overcook it.

Since we want the rice starch for the creaminess of the risotto, it is important that you do not rinse the rice before cooking!

If this is going to be your first time making risotto, I feel that I should warn you: it requires quite a bit of babysitting.

Risotto is cooked in a simmering broth very slowly over a 25-30 minute period.

The cook (that’s you) ladles a small amount of broth into the risotto and cooks, stirring the ENTIRE time (which feels like an eternity) until the liquid is absorbed.

Then, you add another ladle of broth, cook until it absorbs, then another, and then another, until all the broth is cooked into the risotto.

I like to bring a stool into the kitchen so I can sit while I’m making it. That’s right, you heard me. Feel free to do the same! 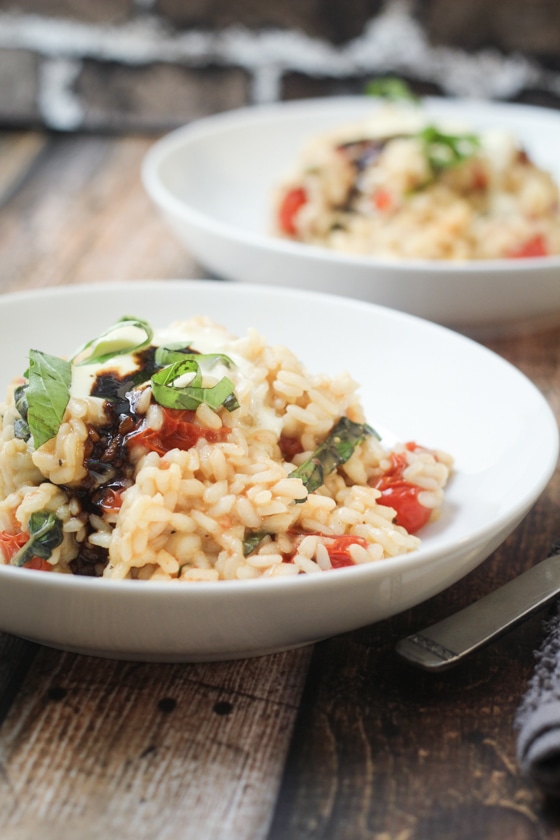 I promise that it really isn’t as bad as it sounds. Pour yourself a glass of wine, pull up a stool, and get your wooden spoon ready. 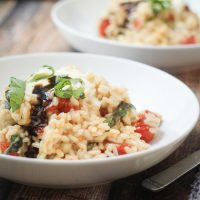