(I partnered with entwine wines to bring you this series!)

Alright, folks. Today is Friday and it’s time to start thinking about wine.

In last month’s Wine 101 post I explained that wine “rules” don’t need to be taken so seriously. With that said, there are some basic bits of knowledge that are good to know when it comes to cooking with wine.

First, it is beneficial to have an understanding of the core differences between wine classifications, as well as an idea of where a wine varietal falls on the dry to sweet continuum. It is also useful to know which types of wines are better for cooking and which are better for drinking. Lastly, we should talk about the more technical aspects of cooking with wine, such as when to use red versus white wine, when to add wine during the cooking process, how alcohol is cooked out, and substitutions you can use if you’re cooking for someone with a sensitivity. 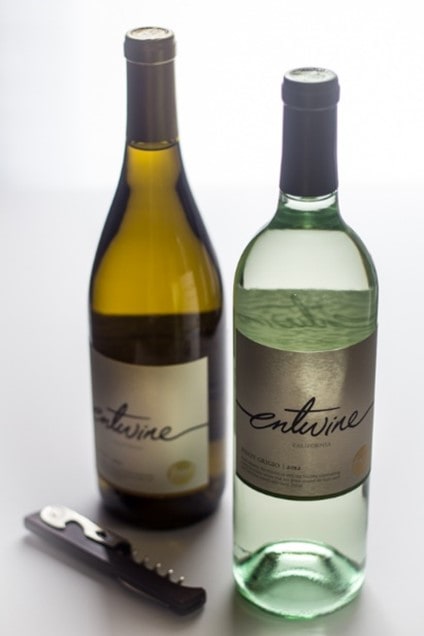 For the purposes of cooking, I’d steer clear of using much sparkling or dessert wine. There are, of course, exceptions to every rule, but other than making a champagne-vinaigrette or poaching pears in a dessert Muscat, you won’t find too many uses for these in the kitchen (other than the obvious use of keeping the cook happy, that is).

That leaves us with red, white, rosé, and fortified wines. Red wine is made from black grapes and develops its color from the pigment found in grape skins. White wine is typically made from white grapes, while rosé gets its “blush” color from a few hours of brief contact with black grape skins. Wines that are made with the inclusion of grape skins have tannins, which provide that dry, pucker-up sensation in the back of the mouth. Fortified wines are wines made with the inclusion of spirits, such as Port, Sherry, and Masala.

There are certainly sweet varieties in each of these four wine classifications, many of which can be used for cooking. My advice would be to stick with dry wines for cooking unless a recipe explicitly calls for something sweet. Remember: it is a lot easier to add a bit of sugar to a dish than it is to remove it.

Most of the time a recipe will call specifically for “dry” wine. But how do you know which wines are “dry” and which are “sweet?”

Here’s a handy chart I put together to help you pick a wine that will work for you:

I like to keep a few bottles of entwine’s Chardonnay and Cabernet Sauvignon on hand because they work with just about everything!

Wine for Cooking vs. Wine for Drinking

This shouldn’t come as a surprise to you if you remember my Wine 101 post where I urged the general population to stop being so hoity toity about wine. Anytime I cook with wine, I want to be able to first pour myself a glass and then measure out whatever is needed for the recipe. That’s another reason to stock up on a few bottles of entwine wines; they were developed specifically to be paired with food (and are just as tasty when sipped on their own). 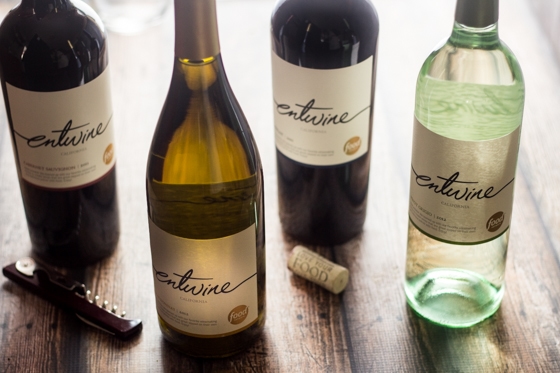 You may be wondering about using some of the “cooking” wines you’ve seen at the grocery store, typically labeled “cooking sherry” or sometimes just “red cooking wine.” Please just PUT DOWN that bottle and step away. “Cooking wines” are typically laden with extra sodium and will just take up extra space in your house.

If you want to use sherry, just walk on over to the REAL wine aisle and buy yourself a bottle. You might be surprised by how tasty a little glass of sherry can be! 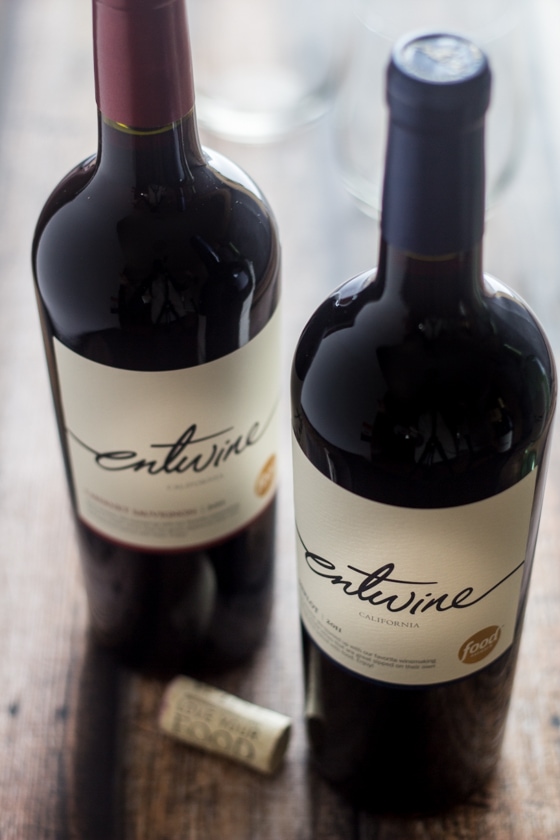 I promised you some help with the more technical aspects of cooking with wine, so here they are:

When do I use red wine versus white wine?

Use red wine to add color and body to a dish. Beef, lamb, and game meats are especially delicious when cooked with red wine. Try these recipes on for size: German Goulash, Hearty Beef Stew, and Rabbit in Red Wine Sauce.

Okay, so when do I add the wine?

The two most common ways to use wine in a recipe are to use wine as a base, or to use it to deglaze fond from a pan.

When cooking with wine as a base, the wine is typically added early on in the cooking process because the large quantity of wine will need a time to cook down. This is the method used when making a classic Beef Burgundy or a creamy Risotto.

When using wine to deglaze, the wine is poured onto a very hot pan to remove all of the delicious stuck-on bits created during the cooking process. This method calls for a much smaller amount of wine (typically between a quarter and a half cup), and is appropriate for making sauces or just adding a bit of acidity and flavor to a dish. 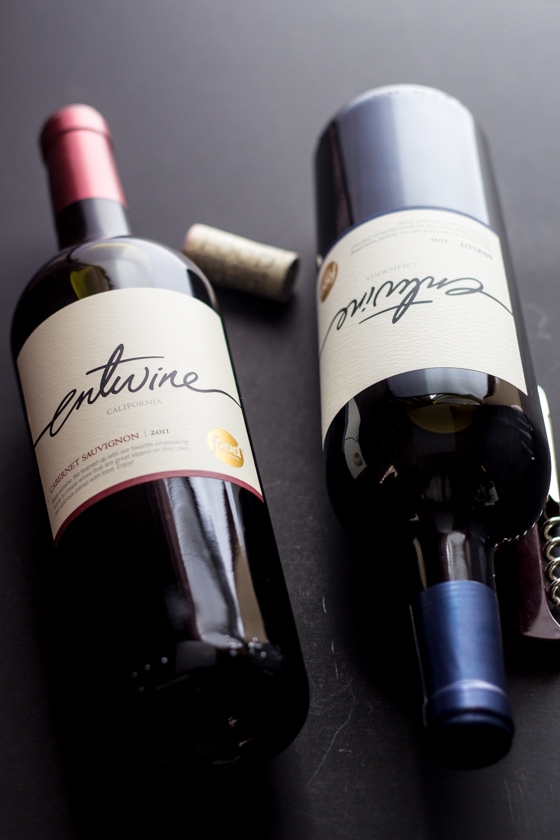 What about “cooking out the alcohol?”

It is very difficult to cook wine long enough to remove ALL of the alcohol. According to the U.S. Department of Agriculture, even after baking or simmering a dish with alcohol in the mixture for two and a half hours, 5% of the original alcohol content remains in the dish. Long story short, the longer you cook the wine, the less alcohol remains. If you are cooking for someone with a sensitivity, you might be better off leaving it out.

What could I substitute instead?

When I need a substitute for wine, I typically use this formula:

Red wine: For every cup of red wine called for, I use 1 cup broth + 1 tablespoon red wine vinegar.

White wine: For every cup of white wine called for, I use 1 cup broth + 1 tablespoon white wine vinegar.

Use your best judgment to determine the type of broth you should use. For a chicken dish, chicken broth would be the best bet. Cooking for a vegetarian? Try using a savory mushroom broth. Get creative and have some fun with it!

Special thanks to  entwine wines for sponsoring this series! I hope this guide brings you a sense of confidence in the kitchen when cooking with wine. I’d love to answer any questions you have in the comment section below!